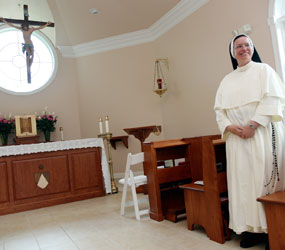 CATONSVILLE – Dominican Sister of St. Cecilia Amelia Hueller relaxed in the sitting room of a new convent and reflected upon the benefactors who made it possible.

Sister Amelia spoke June 12, a short stroll down a hill from Mount de Sales Academy, where she teaches Spanish and apologetics in a school that has benefited from the leadership of the Nashville Dominicans since 1985.

“Their joy and enthusiasm inspires us to do better,” said Bridget Boland, a rising senior. “You can see God in them. To see their dedication, how they’ve given their whole life to God, that makes you want to serve others.”

A parishioner of St. Agnes, Boland volunteers for the Little Sisters of the Poor at their St. Martin’s Home for the Aged. She also helped during an open house, when an estimated one thousand students, alumni and friends toured the convent.

Sisters are cloistered on its second floor, in rooms called cells. In addition to the sitting room, the main floor includes a kitchen, dining room and intimate chapel. A hallway that features bas reliefs of Matthew, Mark, Luke and John leads to the chapel, where the aisle is flanked by 14 one-person pews.

According to Sister Anne Catherine Burleigh, principal of Mount de Sales, it currently houses eight sisters, six of whom work at the school.

Archbishop Edwin F. O’Brien dedicated the chapel during a Pentecost Sunday Mass, and then the rest of the convent.

“There is no doubt, that the Nashville Dominicans are aware of the Holy Spirit in their lives,” the archbishop said during his homily. “These sisters instill in their graduates the sanctity of human life and provide an authentic Catholic culture.”

The pastor of St. Bartholomew in Manchester and an authority on Archdiocese of Baltimore history, Father Roach wore vestments made by Visitation nuns, who had directed Mount de Sales before the Nashville Dominicans assumed its administration.

A fact-finding mission that led to that transfer included a Father Roach-led tour of the school, which had opened in 1852.

“I was on our council when we came to visit in the early 1980s,” said Mother Ann Marie Karlovic, prioress general of the congregation. “Father Roach took us through the entire school, from the basement to the cupola. It’s a place with deep tradition and roots. That’s important, at a time when things change so quickly.

“We have very carefully planned the convent, to support a contemplative and apostolic life.”

The sisters vacated a converted gatehouse on Academy Road that had been their home. The $1.5 million convent is part of the $4 million first phase of a Mount de Sales capital campaign.

According to Sister Philip Joseph, all but $180,000 of that $4 million has been raised. According to a news release from school, it’s the first convent built “in this area to accommodate a growing religious order in more than 50 years.”