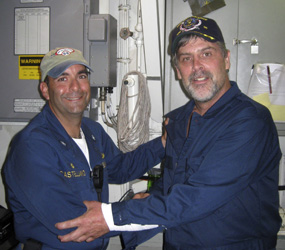 WASHINGTON – When news of the bold liberation of U.S. Capt. Richard Phillips from the grip of pirates off the coast of Somalia filtered through his Vermont Catholic parish April 12, members of his church community felt like their Easter prayers had been answered.

“We’re so happy that it turned out the way that it did,” said Donna Schaeffler, secretary of St. Thomas Church in Underhill Center, Vt., the parish where Phillips, 53, and his wife, Andrea, regularly attend Mass.

“There is so much media here and we’re trying to give the Phillipses their privacy, but we’ve been praying at Mass for his safe release,” Ms. Schaeffler told Catholic News Service April 13 in a telephone interview.

“Our pastor (Father Charles R. Danielson) also asked everyone to pray for the Phillipses during the Easter morning Mass. We were just so happy to hear the news of his rescue later in the day,” she said.

Mr. Phillips allowed himself to be taken hostage by four pirates who tried to seize the U.S.-flagged Maersk Alabama April 7 in the Indian Ocean, in order to keep the crew of the 17-ton ship safe.

He was detained by his armed captors on one of the ship’s lifeboats for five days. U.S. naval forces surrounded the small boat, and Navy snipers fired three shots to kill a trio of Somali pirates and free the American sea captain, a Navy commander told The Associated Press April 13.

The fourth pirate, who had been aboard the USS Bainbridge for negotiations about the captain’s release, surrendered and could face life in a U.S. prison, the AP reported.

President Barack Obama, who told the AP he was pleased with the rescue, said Mr. Phillips’ courage was “a model for all Americans.”

The White House had authorized the Navy to take action to resolve the five-day standoff.

The U.S. sea captain told news reporters shortly after his rescue that he was not a hero, and praised the Navy SEALs for their efforts in securing his freedom.

“This is a small community and everyone here has been concerned,” Ms. Schaeffler told CNS. “Our office has been flooded with phone messages and e-mails from people who have expressed their well-wishes to Capt. Phillips and his family. When things settle down, I’ll make sure they get these messages.”