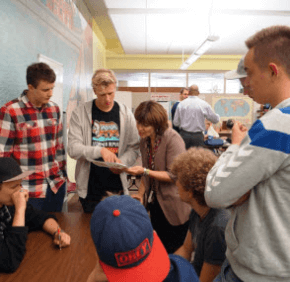 By Jessica Marsala
jmarsala@CatholicReview.org
Twenty-five students from Denmark on a recent trip to the United States discovered that in a big city such as Baltimore, there is a world below, as one put it, “high skyscrapers everywhere.”
“In New York we saw many poor people, we saw many beggars and people who have nothing who are living on the streets,” said Mathias Mejlholm, a student from Holstebro Gymnasium secondary school in Holstebro, Denmark. “There also is that in Denmark, but not that many …”
The students visited the Esperanza Center in Baltimore Oct. 9 to learn about immigration as part of their 12-day trip, which in addition to New York City, included a visit to Washington, D.C.
This year the center, which is sponsored by Catholic Charities of Baltimore, celebrates 50 years of being a “one-stop shop” for immigrants’ legal, health, language and citizenship needs, according to Beth Awalt, the volunteer coordinator and manager of building operations.
Jane Birgitte Nielsen, the teacher who accompanied the students, described Holstebro as very “homogeneous.” While Spanish is offered as a course of study in their school, meeting a Spanish-speaker – the dominant clientele – at the Esperanza Center was an entirely different experience.
“To see a place where people go because it’s so essential for them to learn a new language,” Neilsen said, “I think that made an impression on them.”
Immigration in Denmark also differs, since the country is a member of both the European Union and the Schengen Zone, which, according to the Schengen Borders Code, “Irrespective of nationality, any person may cross the internal borders at any crossing point without checks being carried out.”
“You talk about immigration in different terms than we do,” Nielsen said. “You talk about diversity, that’s a positive word. … Our history’s different from yours.”
Nielsen expressed surprise at what she described as the “impressive” spirit of volunteerism that pervades the Esperanza Center. Students likewise were shocked that the center is able to help so many people with its limited staff.
According to Awalt, last year a total of 624 volunteers donated about 20,000 hours at the Esperanza Center.
Neilsen remarked that in Denmark, because of its welfare system, their “tradition of volunteer work” is not as large in scale as that of the United States. According to the website, Denmark.dk, the “Scandinavian welfare model” gives its citizens free health care and education in exchange for high taxes.
“We kind of learned how bad things can get over here and we’re not used to that because we have the free health care,” said Emil Nyborg, another Holstebro student. “To come out here to the Esperanza Center and see how people are willing to sacrifice and help others in need is just fantastic and wonderful to experience.”
Mejlholm, the student who was surprised at the level of poverty in New York City, agreed with Nyborg, “We’ll be safe in Denmark no matter what happens, so it’s nice to come here and see that you do things to other people, which are donated and people are working voluntarily, so it’s nice to see, very nice.”
Also see:
Diverse culture worship, ‘walk’ together at Hispanic Mass
Inside sports: Reif cup honors Curley coach, Calvert Hall parent
PrevNext