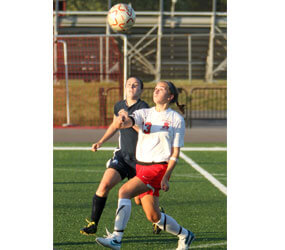 Beard, known as Dani to her friends, caught the attention of girls’ varsity soccer coach Bob Dieterle because of her commitment to defense. He had to keep her on the team.

“You always have nerves,” she remembered of tryouts. “You always make mistakes. In the end, you’ll show how you can play.”

Beard saw older Spalding players lead by example on and off the field, and wanted to be like them. Now a senior with a 4.0 grade point average, Beard is a captain of Spalding, one of the nation’s top teams and the defending Interscholastic Athletic Association of Maryland A Conference champion.

Spalding recently had its 38-game winning streak snapped in the championship game of the ESPN Rise tournament in Indiana. The team’s schedule features many of the premier teams from Baltimore and Washington.

Dieterle said, “I told Dani and a couple of the captains ‘I’m going to challenge you guys even harder than in the past.’ We had our 38-game winning streak end, but we’re starting a new one. We have no regrets.”

“We knew it was going to be a big year for us,” she said. “We know of the legacy before us. We all knew that coming into the season. We’re going to work to make us strong again. It can be a good team again and it depends on how we come together.”

Beard, a standout sprinter on the indoor and outdoor track and field teams, will utilize her speed at sweeper back, after shining as a stopper in the past. Defense is something Spalding does well, as the team allowed just six goals in 21 games last season.

Beard has committed to play next year for Division I American University. She earned that opportunity, because she learned how to balance sports and academics at an early age. She takes mostly honors and advanced placement classes at Spalding.

Dieterle said, “Dani really epitomizes what’s right. The other girls see how well she plays on the field and how well she does off of it.”