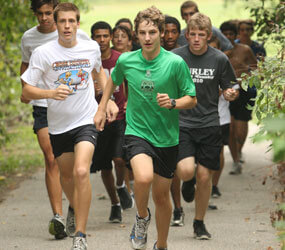 Archbishop Curley senior Alex Waldt aspires to a high finish at the Maryland Interscholastic Athletic Association cross country championships, but athletic excellence was hardly forecast for him three years ago.

“As a freshman, Alex was one of the worst runners on our track team,” said Gene Hoffman, the Friars’ veteran coach. “He’ll be a better runner in college, with its longer races. He is the epitome of work hard, and let’s see what happens.”

Waldt carries that ethic into the classroom, where he maintains a perfect 4.0 grade point average, 4.6 on a weighted scale after his subject matter is accounted for, which this year includes Advanced Placement calculus and physics.

The editor of the yearbook, Waldt has clearly found his niche, taking comfort in the knowledge that he is not the first Curley man to start his high school sports career on the frosh-soph soccer team before finding his way to Hoffman.

“I thought I had a chance to be better in running than soccer,” Waldt says. “I could see I had a lot more potential there.”

That pragmatism is a valued attribute in the MIAA, where the individual drama is on who will finish second to Loyola Blakefield’s Matt Jablonski, the best prospect the league has ever produced.

He ran 3,200 in 10:00.3 in an indoor meet last January, before February’s snowdrifts slowed his development.

“Coming out of the blizzard, I came back too hard and injured a knee,” Waldt said. “Spring track ended up being a wash.”

Summer training concluded with a trip to Colorado Springs, Colo., where the Friars were guests of Stan Lambros, a soccer-track standout for Curley in the early 1980s who directs a powerhouse cross country program at Cheyenne Mountain High.

“We all learn about the great championship teams here at Curley,” Waldt said. “That tradition motivates you to be a part of one of them.”

The Friars’ prospects of challenging Loyola, Calvert Hall and Gilman took a hit when Dave Ozarowski injured a hip.

Waldt heard of Curley history from his older brothers Chris and Steve, who ran for the Friars. An altar server while growing up in St. Francis of Assisi Parish, he learned about service from a large extended family, where Aunt Judy happens to be Mission Helpers of the Sacred Heart Sister M. Judith Waldt.