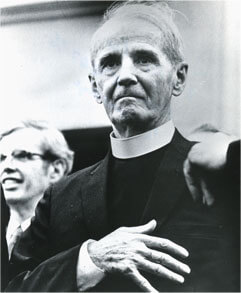 CUMBERLAND – Early in his ministry as one of the first Maryknoll missioners to China nine decades ago, an idealistic young priest from Cumberland came across a Chinese farm boy working in a rice field near Jiangmen.

As the weary boy leaned on his hoe and peered at the cleric, the priest was filled with what he later described as a “fiery surge” of love for everything the boy represented.

The priest had left his native Western Maryland to serve people exactly like the shoeless youngster before him. These were people of all races he called “overworked, overlooked, forgotten and despised.”

“Come to me often in your barefoot squalor and look at me from out of those hopeless and bewildered eyes,” the priest remembered in an essay. “Do not let me forget that vision, but stay by me and preside over my dreams. Teach me that souls are people. And remind me everlastingly that they are magnificent people like you.”

The man who wrote those words was Bishop James E. Walsh, M.M. – the first Maryknoll bishop and a son of St. Patrick in Cumberland. His reflections weren’t just those of a romantic adventurer. They represented an unwavering commitment to the downtrodden that would prove itself when the bishop was arrested by the Communists and imprisoned for 12 years.

Twenty-seven years after his death, leaders of Bishop Walsh’s home parish are working to raise awareness about a man whose virtuous exploits seem less recognized with each passing decade. Several months ago, an entire room of St. Patrick’s parish center was dedicated to Bishop Walsh, featuring hundreds of photos, newspaper clippings and artifacts. Bishop Walsh School in Cumberland, named in the prelate’s honor, has also made an effort to educate children about their patron and the charism of the Maryknollers.

“We’re afraid the legacy is being lost because we’re getting so far away from his death,” said Monsignor Thomas Bevan, St. Patrick’s pastor. “He was a great man, and we want more people to know about him.”

Deacon Francis L. Werner Jr., a nephew of Bishop Walsh who serves at St. Patrick, remembers his “Uncle Jim” as a “gentle man” who was deeply committed to his faith. He first met Bishop Walsh in 1938 when the future deacon “took a crash course” to become an altar server so he could serve Mass with Bishop Walsh in his hometown.

After his graduation from what was then Mount St. Mary’s College in Emmitsburg, Bishop Walsh decided to become a Maryknoll priest when Father Thomas Price, one of the co-founders of Maryknoll, visited the Walsh family in Cumberland.

“It was at the dinner table that Father Price’s vision came into discussion,” said Deacon Werner. “It inspired Uncle Jim.”

Deacon Werner recalled that Bishop Walsh always admired missionaries and counted St. Francis Xavier as one of his favorite saints. St. Francis was the famous Jesuit missionary who died on South China’s Sancian Island – the same island where Bishop Walsh was ordained the first bishop of Jiangmen at age 36.

Bishop Walsh would later serve 10 years in the United States as general superior of his religious community before returning to his beloved China where he ministered to Catholics at a time when the government was lashing out at any perceived threats to communism.

Arrested by the communists in 1958 and accused of spying for the Vatican and the United States, Bishop Walsh was sentenced to 20 years of imprisonment. During the 12 years he served of the sentence, the bishop had only one visitor from outside China – Judge William A. Walsh, his brother and a former Maryland state attorney general. The communists refused to let Judge Walsh give a rosary to his imprisoned brother.

After his sudden and much-celebrated release at age 79, Bishop Walsh proclaimed his innocence. The Chinese government provided his basic needs, he said, but he had endured “periods of harassment and suffering” in prison. It was especially hard to bear the monotony of daily confinement, of waking up each morning and “trying to plan how I would occupy my day so as to maintain my sanity and ideals as a priest and missioner to the Chinese people,” he said.

But the bishop held no bitterness toward those who condemned him.

“I just could never feel angry with any Chinese,” he said. “I felt that way almost from the day I first set foot in China in 1918 and it has just grown stronger with the years, even during my imprisonment.”

Those who remember his priestly example today are praying that he might be recognized as a saint.

“I would hope one day it would happen,” said Monsignor Bevan.