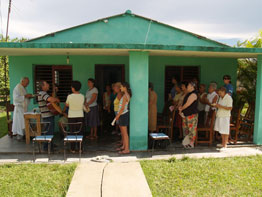 Wooden chairs were lined up, row by row, to accommodate neighbors. A visiting priest turned a small table into an altar. Another man strummed the opening song on his guitar while a couple of horses rested on the nearby grass, languishing in the muggy heat.

Liturgies at home have become a phenomenon in Cuba as the church slowly rebuilds communities of faith. They are a way of bringing Jesus into the barrio instead of expecting that people make their way to a church they might not have attended in decades – or ever.

These missionary houses of prayer are known as “casas de mision,” and Santa Catalina Parish in Pedro Betancourt has about 15 satellite mission homes and a chapel.

Isabel Maria Marishal, 65, offers her home as a mission house in this particular neighborhood. Transportation is difficult in the island country, and bus service is hard to come by in the farmlands. Mrs. Marishal, who has heart problems and diabetes, stopped going to Mass for a time; the chapel about a mile away was too far for her to walk. So she welcomed the opportunity to gather neighbors in her home for liturgy.

Her husband is often working and her two children are grown and no longer live with them.

Mrs. Marishal said she learned the faith from her family as a young girl. It’s a faith she’s held onto even after Fidel Castro’s revolutionary government came to power in 1959 and Castro declared himself a Marxist-Leninist in 1961. Cuba was officially atheist until 1992, when that word was struck from the Cuban Constitution.

Missionary homes began appearing in the 1990s as tensions started easing between the government and the Catholic Church. “Casas de mision” continued flourishing after Pope John Paul II made a historic visit to the island in 1998.

Jesuit Father Robert Alonzo, pastor of Santa Catalina Parish, makes his way up the hill to Mrs. Marishal’s home on a compact motorcycle.

During the homily one Saturday afternoon, Father Alonzo talked about Jesus’ cup of suffering, which the priest said was widely misunderstood by the apostles as they bickered among themselves for power.

“This is what is distinctive about being a Christian – service,” said the silver-haired priest as a few raindrops began to fall. “You all know that there are many ways to serve. Even giving an aspirin to a neighbor who comes by with a headache. That’s a service. Allowing someone to take a ‘guayaba’ fruit from my tree so they can make a little juice drink. That’s serving. All that I do to serve my brothers and sisters, to alleviate their situation, that is service.

“We are going to ask God in our Eucharist today to help us to serve – that we live with an attitude of service,” added Father Alonzo.