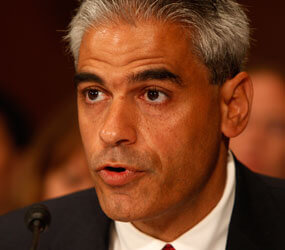 WASHINGTON – Catholic theologian Miguel Diaz was confirmed by the U.S. Senate Aug. 4 as the ninth U.S. ambassador to the Vatican.

A professor of theology at the College of St. Benedict in St. Joseph, Minn., and St. John’s University in Collegeville, Minn., Diaz is the first Hispanic to serve in the post.

Diaz issued a statement through St. John’s University Aug. 5, saying he was grateful to the Senate for its vote and to President Barack Obama “for the confidence he has invested in me.”

“I am honored to be given the responsibility of representing the people of the United States to the Holy See,” he said in the statement posted on the Web site of St. John’s University. “I very much appreciate the support of all those who have reached out to me and to my family with their prayers and best wishes during this process.”

He also said he planned to move his family to Rome and present his credentials to Pope Benedict XVI as soon as possible. His wife, Marian, directs Companions on a Journey and CORAD: Heart Speaks to Heart at the College of St. Benedict and St. John’s University. The couple have four children.

Born in Havana, Diaz, 45, comes from humble beginnings. His father worked as a waiter and his mother did data-entry work. He was the first member of his family to attend college.

At the time of his nomination in May, Diaz pledged to build upon 25 years of formal diplomatic relations with the Vatican and the work of his predecessors. “I wish to be a bridge between our nation and the Holy See,” he said.

In confirmation hearings July 22, Diaz told Senate Foreign Relations Committee members he wanted to use his academic work on human identity and cultures to ensure a strong friendship between the U.S. and the Vatican. He said he was especially interested in exploring the relationship between religion and human identity, taking into account cultural influences.

Diaz served as a member of Obama’s Catholic advisory team during the 2008 presidential campaign and was a regular campaign spokesman on Obama’s behalf, particularly in the Spanish-language press.

Prior to arriving in Minnesota in 2004, Diaz taught at Barry University in Miami Shores, Fla.; St. Vincent de Paul Regional Seminary in Boynton Beach, Fla.; the University of Dayton in Ohio; and the University of Notre Dame in Indiana. He is fluent in Italian, Spanish and French.