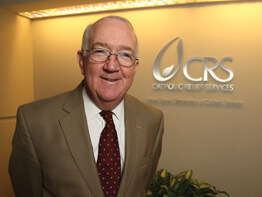 Kenneth Hackett knows things are bad when the Missionaries of Charity come knocking on his doors at the international headquarters of Catholic Relief Services in Baltimore.

The order of nuns founded by Blessed Teresa of Calcutta has a special ministry to the poorest of the poor, and they serve in many of the same developing countries as CRS.

“They’re the first ones to feel the poor falling through the safety net because those who have nothing come knocking on their doors and the Missionaries of Charity come to us and say, ‘we need some major help,’” said Mr. Hackett, president of an agency that annually helps about 80 million people in more than 100 countries.

“It’s a sign of the reach of the global food crisis we have right now,” said Mr. Hackett, whose organization has stepped up its commitment to the Missionaries of Charity. “It’s been tough and it’s going to get tougher.”

CRS, the official international humanitarian agency of the U.S. Catholic community, is facing what well may be one of the most challenging periods of its 65-year history. A weakened dollar has helped drive the organization’s operating costs up 20 percent. The global food crisis and high energy costs have led to increased prices. With Wall Street off balance, the value of CRS’s investments has dropped even as private donations have gone up.

Despite the obstacles and some belt-tightening, Mr. Hackett is determined that CRS will continue lifting up the poor and vulnerable around the world – many of whom would have nothing otherwise.

In mid-September, CRS approved a $682 million budget for the fiscal year 2009. Of the money the organization receives, 72 percent will be directed to sub-Saharan Africa. Asia will receive about 12 percent, Latin America 11 percent, and 5 percent will go to Europe.

Disaster relief is CRS’s “bread and butter,” according to Mr. Hackett, who pointed to his agency’s response in Cuba and Haiti as those island nations recover from recent hurricanes.

The agency has already provided food rations to more than 4,300 families in Haiti, along with other essentials to an additional 1,000 families. Some 2,200 hygiene kits are being distributed in Gonaives and Port de Paix. Working with partners, CRS is sending an initial 170,000 pounds of food and supplies to Cuba.

CRS was a major player in helping victims of the 2004 tsunami get back on their feet in Indonesia, India and Sri Lanka. The agency raised nearly $180 million for the relief effort, built more than 9,000 homes and provided emergency food and supplies.

HIV/AIDS outreach in Africa and malaria-prevention programs around the world are other areas of focus for the agency.

CRS tries to get at the roots of problems, Mr. Hackett said, often working with local churches. Peace-building and microfinance programs are among the ways the agency tries to strengthen communities.

“As we carry out our work, it’s not just giving stuff,” Mr. Hackett said. “It’s all of that in the context of respecting the dignity of the individual and recognizing that their ideas count.”

In the weeks leading up to the U.S. presidential election, CRS is urging the candidates to make global poverty a priority. Mr. Hackett met Democratic Sen. Barack Obama before he became a presidential candidate and has met with one of Republican Sen. John McCain’s advisors.

“We don’t favor one or the other,” he said, “but we do try to get in front of their teams some ideas that would be favorable to the people that we’re working for all around the world.”

Bill O’Keefe, senior director for CRS’s advocacy department, said it is urging the candidates to support reform of foreign assistance to focus more on poverty reduction. Foreign assistance represents about 1 percent of the total U.S. budget, he said.

“There is no doubt the next administration and Congress have tough financial problems they will have to deal with,” Mr. O’Keefe said in a Sept. 23 teleconference with Catholic journalists.

“But there is a missed opportunity by the candidates to demonstrate their own leadership and to prove to the voters they can think comprehensively and broadly about comprehensive issues,” he said. “The person who can demonstrate they can do that is more likely to win the election.”

Asked what Catholics in the pews can do to help CRS, Mr. Hackett responded with one word: “pray.”

“I know they’re praying for a lot of things, like getting out of this terrible war and the (economic) slump we’re in and all kinds of things,” he said. “But they can pray. They can become engaged. They can bother to find out.”