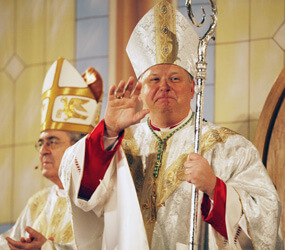 KNOXVILLE, Tenn. – Bishop Richard F. Stika was ordained to lead the Diocese of Knoxville March 19 before a crowd of 5,000 that included members of his new flock in east Tennessee and hundreds of friends from a lifetime spent in the Archdiocese of St. Louis.

One of his closest friends was the principal consecrator, Cardinal Justin Rigali of Philadelphia, who was archbishop of St. Louis from 1994 until 2003.

As a priest of the St. Louis Archdiocese, then-Monsignor Stika worked for then-Archbishop Rigali in a variety of roles, including secretary, vicar general and local organizer of Pope John Paul II’s 1999 visit.

In 2004 the priest was named pastor of the Church of the Annunziata in Ladue, Mo., where he was serving when he was named bishop of Knoxville Jan. 12.

“It is impressive to see how many people – your priests, deacons, seminarians, religious and laity, and so many members of the wonderful choir – have assembled here today in prayer, to welcome you as their own shepherd,” said Cardinal Rigali in his homily during the ordination Mass at the Knoxville Convention Center.

“It is gratifying also to see the large delegation from St. Louis who are here to show you their love and support and to show their solidarity with your new family, the Diocese of Knoxville,” he said.

Bishop Stika, 51, becomes the third bishop to lead the Knoxville Diocese, home to nearly 60,000 Catholics in 47 parishes and missions. He pledged “to the good people of the diocese to be a good shepherd” to them. “I promise that I will give you everything that I have,” he said.

“I consider it a true grace to have received the call of His Holiness to be your bishop,” he said. “And a great consolation for me is to know that when the Eucharist is celebrated in this great Diocese of Knoxville, prayers for ‘Benedict our pope’ and ‘Richard our bishop’ will rise to the heavens.

“And also in my moments of weakness, I have the assurance of the Scriptures knowing that the Lord takes the weak, and he makes them strong,” he said.

Knoxville’s second bishop, now-Archbishop Joseph E. Kurtz of Louisville, Ky., was a co-consecrator of Bishop Stika along with Bishop Robert. J. Shaheen of the Maronite Eparchy of Our Lady of Lebanon, which is based in St. Louis.

As pastor of St. Raymond Church in St. Louis, Bishop Shaheen had hired a young Rick Stika to work for him. During the ordination Mass, the Maronite bishop read a letter of congratulations to the new bishop from the patriarch of the Maronite Catholic Church, Cardinal Nasrallah P. Sfeir, in Lebanon.

The opening procession included 32 archbishops and bishops, two abbots, more than 60 men and women religious, about 125 deacons, and dozens of priests from the Knoxville Diocese and the St. Louis Archdiocese.

Traveling the farthest to the ordination were Father Anthony Asoanya, chancellor of the Archdiocese of Onitsha, Nigeria, who was representing Archbishop Valerian Okeke, and Father David Carter, a Diocese of Knoxville priest who is studying canon law in Rome.

The new bishop closed with a hope that “all of us deep in our hearts can pray my episcopal motto daily: ‘Jesus, we trust in you.’”