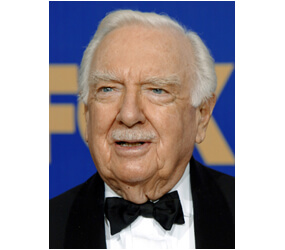 WASHINGTON – TV news anchor and journalism icon Walter Cronkite, who died July 17 at age 92, made the public “feel the news,” said the founding director of the Pauline Center for Media Studies in Culver City, Calif.

“My first memory of Walter Cronkite was seeing him bow his head, visibly moved, when he announced the death of President John F. Kennedy,” said Sister Rose Pacatte, a member of the Daughters of St. Paul, who has experience in various media such as television and radio producing.

“The timbre of his voice and his kind countenance made him welcome in every living room in America then and for years after. … If Edward R. Murrow could be called the brains of the news, then Cronkite was its heart. He made us feel the news; it was personal; the news mattered,” she said in a telephone interview with Catholic News Service.

Best known for his news coverage on the “CBS Evening News,” Cronkite was known to many as “the most trusted man in America.”

He died in his New York home, and his chief of staff, Marlene Adler, told The Associated Press the cause of his death was cerebrovascular disease.

A private funeral was scheduled for July 23 at St. Bartholomew’s Episcopal Church in New York. A larger memorial was expected to take place at Lincoln Center within a month.

Cronkite served as anchorman for the “CBS Evening News” from 1962 to 1981, covering many memorable events including the resignation of President Richard M. Nixon, man’s first steps on the moon, the Vietnam War, and the assassination of Kennedy, America’s first Catholic president. Many say they remember him for his sensitive handling of these events.

He received numerous awards and honors throughout his life. In 1980 he was recognized for excellence in broadcasting with the Gabriel Award for personal achievement from what is now the Catholic Academy of Communication Arts Professionals, a national association of Catholic broadcasters and allied communicators.

He received an honorary degree from the University of Notre Dame in Indiana in 1982 as part of the dedication of a new chemistry research facility. In honoring him the university noted his association with the nation’s space program since he first covered it in 1956 and his hosting of a CBS science series called “Universe.”

He also received Peabody awards in 1962 and 1981 and multiple Emmy awards over the years.

In 1977 the Catholic League for Religious and Civil Rights gave the newsman its Earl Butz Bigotry in Media Award for what it said was his biased and inaccurate coverage of a congressional debate over funding for Medicaid abortions.

The league’s associate executive director at the time, Michael Schwartz, accused Cronkite of implying the country’s Catholic bishops had violated the provisions of church-state separation by objecting to the funding, according to a news story in the CNS archives. Cronkite also missed the point of the debate, Schwartz said, which was whether Catholics opposed to abortion would be required to help fund abortions for Medicare patients.

Born in St. Joseph, Mo., Nov. 4, 1916, Walter Leland Cronkite was raised in Houston, where he attended San Jacinto High School. He enrolled in the University of Texas in 1933 and later married Mary Elizabeth “Betsy” Maxwell; the couple had three children.

After dropping out of school two years later, Cronkite worked as a radio announcer with WKY in Oklahoma City and soon after began working for the United Press wire service. In 1950 Murrow of CBS News offered Cronkite a position working with an affiliate station in Washington. Cronkite accepted the offer and held a number of different positions within CBS before landing his most famous role as anchorman of the “CBS Evening News.”

Through his work and his career, Cronkite earned admiration from many fellow journalists, media professionals and viewers alike.

The president of the National Catholic Association of Communicators at the University of Dayton in Ohio, Sister Angela Ann Zukowski, said she analyzed other journalists’ work by using Cronkite’s report as a ruler.

“I really believe that Walter Cronkite is one of the stellar icons of quality journalism in the United States. He was an authentic journalist; he was someone who I think personally did his homework to present the truth, looking at it from many different perspectives,” Sister Zukowski told CNS in a telephone interview.

“The way he conducted himself as a journalist called for deep professional respect and admiration,” added the nun, who is a member of the Mission Helpers of the Sacred Heart.

According to AP, Cronkite was to be buried in Kansas City, Mo., next to his wife, who died in 2005. He is survived by his three children, Nancy, Kathy and Walter (Chip) Cronkite III.