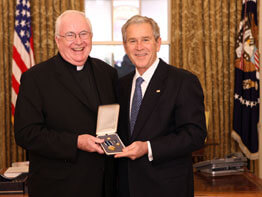 Jesuit Father John P. Foley, founder of the Cristo Rey Network of schools, looks around the country and sees hope in Catholic schools, even as many are shutting their doors.

Father Foley visited with the faculty and staff of Cristo Rey Jesuit High School for a Jan. 15 retreat at Ellicott City’s Shrine of St. Anthony. The Baltimore school joined the network of 22 United States schools a year ago.

“We’re just trying to re-establish the foundation of why we began these schools, which is to be a continuation of the Gospel message for these young people who are signing up to go to school with us,” Father Foley said during a wide-ranging interview with The Catholic Review.

Father Foley also talked about the promise of the Baltimore school, the state of Catholic education and his reaction to receiving a Presidential Citizens’ Medal from President George W. Bush.

When he received the honor Dec. 10, Father Foley looked around the Oval Office in the White House and marveled at how far the Cristo Rey mission has traveled in just 13 years.

“I thought, ‘What am I doing here? What is going on?’ It was very humbling,” he said.

Baltimore’s Cristo Rey, he said, is living up to the mission of finding overlooked young people and giving them purpose.

“I see really serious professionals organizing what we think is going to be a top-notch school that is giving a future to a bunch of kids nobody paid much attention to until now,” he said.. “I see lots of hope. Baltimore is a very promising place.”

Father Foley was president of the original Cristo Rey school in Chicago from 1995 to 2002. Since then, he has served as executive chairman of the network.

The Cristo Rey model offers college preparatory classes at a heavily defrayed cost thanks to partnerships with major businesses. Students then work at many of the sponsoring businesses to learn new skills and gain understanding of the world around them.

“I see hope in their eyes,” Father Foley said of students. “They thought there was no way out. That’s the tragedy of our inner-cities, especially for our undocumented kids. They have no place to go. Now they see there is a future and it is all worthwhile.”

Baltimore Cristo Rey opened with a freshman class in the fall of 2007 as enrollment in archdiocesan schools were in the midst of a decline. Father Foley said Cristo Rey’s growth is based in faith and determination.

“It’s kind of a refusal to throw our hands up and say, ‘Well, there’s nothing we can do about this, there’s no solution to this problem,’” Father Foley said. “I think that’s the thing that most excited us. We have a problem. Let’s look for a solution and that’s how the work study was created.”

More than 95 percent of Cristo Rey students around the country are minorities, 55 percent of which are Latino while 34 percent are African-American.

Father Foley said no one model can solve Catholic education’s enrollment issues, but added universal confidence among leaders will send a message to interested parents.