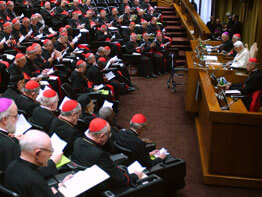 The ceremony to create the cardinals takes only an hour or so, but the celebratory and consultative events that surround it last four days.

The working part comes first, when the pope meets Nov. 23 with the College of Cardinals – including the cardinals-to-be – in a closed-door assembly. The main topic for the morning session is ecumenism, while the afternoon is open to “free interventions” on other matters.

On Nov. 24 the pope holds the consistory proper, a Liturgy of the Word, during which he pronounces a formula that officially creates the new cardinals.

Then, as each cardinal kneels before him, the pope hands him a scarlet biretta – the “red hat” – whose color signifies a cardinal’s willingness to shed his blood for the faith. It’s a moment that always prompts applause from pilgrim cheering sections.

In the afternoon, the Vatican hosts receptions for the new cardinals in an “open house” event that attracts thousands of well-wishers. For some, it’s a rare chance not only to greet the cardinals but also to see rooms of the Apostolic Palace that are normally off-limits.

On Nov. 25, the pope concelebrates a morning Mass with the new cardinals, presenting each of them with a gold ring, a sign of their special bond with the church of Rome.

The consistory and the ring Mass are scheduled for St. Peter’s Square, mainly because of the huge crowds expected. Rain and cold could force the events inside, but that’s a worst-case scenario that liturgical planners hope they don’t have to face.

On Nov. 26, the pope holds an audience with the new cardinals, their relatives and the pilgrims who have accompanied them. It’s a less-formal event and gives the visitors a real chance to voice support for their favorite sons.

In recent years, consistories have celebrated the church’s universality, and this one is no different. Pilgrims from 15 countries are descending on Rome; they include U.S. contingents from the archdioceses of Philadelphia, home of Cardinal-designate John P. Foley, and Galveston-Houston, where Cardinal-designate Daniel N. DiNardo is archbishop.

Some of the new cardinals, including Cardinal-designate Foley, are taking advantage of the pilgrims’ presence to celebrate their first Mass in the Rome churches to which they have been assigned. These “titular” churches symbolize their status as members of the clergy of Rome and their new relationship with the bishop of Rome, Pope Benedict.

Although most of the attention will focus on the public events, the consultative session with cardinals is an important part of the program. Pope Benedict, continuing a tradition of his predecessor, convened the cardinals at his first consistory in 2006 to get their input on issues that included dialogue with Islam and outreach to Catholic traditionalists.

This time, the focus is on ecumenism.

“I am very happy and I am very grateful that the Holy Father has chosen this theme,” Cardinal Walter Kasper, the Vatican’s chief ecumenist, told Vatican Radio.

The cardinal said the session would include a report on the state of ecumenism, followed by a general discussion among the cardinals. The results of a recent Catholic-Orthodox meeting will be taken up, but the discussion will be much wider, covering relations with Oriental churches, Protestant churches and Pentecostal movements, he said.

Cardinal Kasper said the opportunity to examine ecumenical themes with all the world’s cardinals was particularly important because “ecumenism is a mandate from Our Lord. It is not an option, it is an obligation for the church.”

Naturally, not all the cardinals will be able to make it to Rome for the consistory events. Vatican officials were still doing a final tally, but they estimated that about 150 of the 180 existing cardinals would be able to attend.

After this consistory, the College of Cardinals will have 201 members. That’s a record number, but one that seems destined to be broken in coming years.