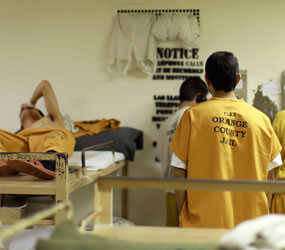 WASHINGTON – The Supreme Court’s May 23 decision upholding orders to reduce the population at dangerously overcrowded California prisons was hailed as a step toward improving inmates’ physical and mental health and religious rights.

The court ruled 5-4 that federal judges were acting well within the Constitution by ordering the state to keep the total population in California’s 33 prisons to no more than 110,000, still well above the 80,000 adults they were designed to hold. As of May 11, the state reported having more than 143,000 adult prisoners, down from the record of 160,000 in 2006.

Two separate class-action lawsuits that say the overcrowding is responsible for violations of prisoners’ rights to mental and physical health care have been working their way through federal courts since the 1990s. A 2009 order of a three-judge panel of the 9th U.S. Circuit Court of Appeals ordered a plan to reduce the prisons’ population to 137.5 percent of their design capacity.

As Justice Anthony Kennedy noted in his majority opinion, in some prisons 200 men may be housed in triple bunks in a gymnasium, with as many as 54 people sharing a single toilet. He cited a psychiatric expert’s report of a suicidal inmate being held while awaiting treatment for 24 hours in a cage the size of a phone booth, with no accommodation for a bathroom.

High rates of untreated mental and physical illness, suicide and violence were among the consequences of overcrowding Kennedy listed. In an unusual departure from normal Supreme Court opinions, Kennedy illustrated his ruling with photos of the crowded housing and the cages.

All of those problems were cited by religious groups who filed a joint friend-of-the-court, or “amicus,” brief who “share a faith-based duty to ameliorate unnecessary human suffering, especially among the marginalized, such as the inmates in the California prison system.”

It said the “inhumane conditions” of the prison system “caused primarily by overcrowding, lead to unnecessary deaths, including suicides, and a host of other unjustified and avoidable harms and affronts to human dignity.”

Franciscan Sister Marie Lucey, associate director for social mission of the Leadership Conference of Women Religious, one of more than a dozen religious organizations that submitted the brief, said the LCWR leaders found the conditions in California’s prisons particularly appalling, even in light of overcrowding in prisons across the country.

She told Catholic News Service the sisters felt strongly that human dignity demands better treatment for people who are imprisoned.

“Jesus himself was tortured,” she noted, quoting the passage from the Gospel of Matthew where Jesus identifies himself with all who suffer, “I was ill and you comforted me, in prison and you came to visit me.”

In the LCWR statement submitted with the amicus brief, she noted: “Confinement to cells 24 hours a day in some prisons, with prisoners packed in like sardines, with a high rate of suicides, is clearly inhumane and runs counter not only to religious values, but to values of human dignity and rights set forth in the founding documents of our country.”

Paulist Father Frank DiSiano, president of Paulist Evangelization Ministries, which also joined the brief, told CNS that prison ministers know their work helps those in detention to use a relationship with God to work toward rehabilitation. The brief noted that in some cases the overcrowding makes it difficult or impossible for religious worship services to be held.

Sister Suzanne Jabro, a Sister of St. Joseph of Carondelet, explained that while prisons might maintain spaces for worship services, overcrowding leads to fights or illness outbreaks, which in turn lead to more frequent lockdowns. When a section of a prison is in lockdown, the inmates housed there cannot participate in activities such as church services or the Father’s Day visits planned by Sister Suzanne’s organization, the Center for Restorative Justice Works in North Hollywood, Calif.

In the Get on the Bus project of the restorative justice center, spouses and children of inmates are bused to prisons for family visits for Mother’s Day and Father’s Day. But Sister Suzanne told CNS that lockdowns might exclude the entire population of a whole ethnic group from having visitors. She explained that prisoners are commonly housed with Hispanics together, African-Americans together and so on, as a way of reducing race-based friction.

So when a fight breaks out – more common in overcrowded conditions – and a lockdown is imposed, “you’ve just locked out 400 people from family visits,” she said.

Sister Suzanne, who has worked in prison ministry in California and Washington state, said the Supreme Court’s order is a welcome start toward addressing a system that has been dysfunctional for years, and not just in California.

“We’re now seeing an implosion of the criminal justice system nationally,” she said.

California authorities expect to work on reducing overcrowding by steps that include sending lower-risk inmates – such as those who are incarcerated for parole violations or who fail a drug test – to county jails or home detention with ankle monitoring bracelet, Sister Suzanne said.

In the restorative justice approach, making it easier for prisoners to spend time with their families is an important step, she added. So being detained in a jail closer to home, where family members can visit more easily, or serving out a sentence at home would be important improvements, she said.

While the court’s action should lead to more such examples of custody reform, Sister Suzanne said there’s much more work to be done in even more basic sentencing reform to avoid sending so many people to prison for so long in the first place.