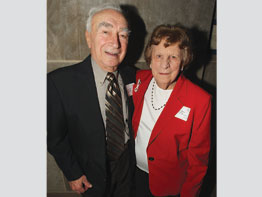 He sat at the kitchen table, held her hands in his and gazed into her eyes.

“I love you, honey,” Oscar Sinibaldi told his wife, Mary.

He said, “Love at first sight.”

She said, “I really felt like he was pushing me, then I saw how serious he was, and then I fell in love with him. He kept telling me how much he loved me, and he brought Valentine’s Day candy and flowers.”

On Feb. 8, more than 69 years after they married, the Sinibaldis joined other couples at the Cathedral of Mary Our Queen as Archbishop Edwin F. O’Brien celebrated a Mass marking World Marriage Day.

More than 200 couples – many of them married at least 25 years – renewed their vows at the Homeland church.

In doing so, Archbishop O’Brien said, the couples rejuvenated their love.

“In the Eucharist you receive, the living Christ gives you his own risen life to support you, for better or worse, in good times and in bad, in sickness and in heath, until a bodily death that will enable you to see love itself, face-to-face,” the archbishop said in his homily.

Surely, the couples at the cathedral knew something of the secrets to a long marriage.

“If we can live with each other’s faults, we’ve got it made,” said Mrs. Sinibaldi, 89. “He has faults; I have faults, so we just live with them and don’t make a big issue of them.”

Mr. Sinibaldi, 92, admits he talks too much. But his wife is quiet, so they complement each other well.

He loves to joke: “Our secret? We go out once a week. She goes Tuesday, and I go Thursday.”

Their daughter, Frances Mary Surowitz, says her parents have always been affectionate and loving.

For most of their marriage, the couple, parishioners of Immaculate Heart of Mary in Baynesville, played tennis, skied and climbed mountains together. They still bowl weekly and date regularly.

They’ve also seen each other through heartbreaks, including the deaths of two of their four children in accidents.

The Sinibaldis, both children of immigrants, married at St. Anthony in Union City, N.J., on April 16, 1939, in a mostly empty church.

“This was a quiet marriage,” Mr. Sinibaldi said, because they couldn’t afford a big wedding.

He had proposed on Valentine’s Day 1937, after first asking Mary’s father.

For their honeymoon, they stayed in a New York hotel.

“We’re blessed by God because we’re still so much in love,” Mr. Sinibaldi said.

And they’re still romantic as ever.

“I got them a heated blanket for Christmas,” said their daughter Ms. Surowitz. “But I had to take it back because he likes it so much when she comes in and cuddles him.”

Couples like the Sinibaldis exemplify how to keep a marriage going, said Darla Phillips, as area executive for Worldwide Marriage Encounter in the area that includes the Archdiocese of Baltimore.

The organization co-sponsored World Marriage Day with the archdiocese’s Division of Evangelization and Catechesis.

“You have to get back to that romance,” Mrs. Phillips said. “That’s very important. When we make our vows as Catholics, we make them for life. We think these couples who have been married so long are incredible examples.”