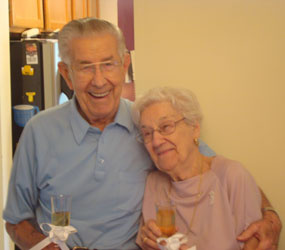 Edwin Becker was 19 when he decided that he couldn’t live his life without Gertrude. At 17, Gertrude just knew she wanted to be with him. So, on Sept. 7, 1935, the couple married at Holy Rosary Parish in Fells Point.

Seventy-five years later, the couple still doesn’t know what they’d do without one another.

The secret to their relationship?

Although they attended the parish school at Sacred Heart of Jesus in Highlandtown and were just two years apart, they didn’t know one another as children. Edwin lived in Highlandtown; Gertrude was a Canton girl.

It wasn’t until Edwin was invited to a nearby party, hosted by Gertrude’s relatives, that their paths crossed. At the party, boys washed the faces of girls with watermelons. Edwin picked Gertrude.

“He washed my face with watermelon,” Gertrude said laughing, “and I think that was the beginning of it. That was a different time.”

The couple said they dated about three years before marrying. During their courtship, Gertrude’s family moved to Essex, while Edwin’s remained in Highlandtown. That didn’t deter them, as they took the bus to see one another. Dates often involved walks around Patterson Park. They enjoyed singing together and, as Edwin put it, “We just liked to have fun.”

Edwin worked just one job in his adult life, 49 years in the mailroom of the Baltimore News-American, which ceased publication in 1986. He retired as superintendent of the mailroom. Gertrude held various jobs through the years and raised the couple’s two daughters, Joan and Carolyn.

Their births were separated by more than a decade, a span that included World War II and their father’s service in the U.S. Army. Stationed in Okinawa, his signal corps was transferred out the day Japan signed its surrender.

“Getting away from my family was a beating,” Edwin said. “It took me about six weeks to get accustomed to it. Good thing I was with a pretty good group of guys. I had to turn out the same way.”

Saying that life was a struggle without him, Gertrude was thrilled when he returned.

The Catholic faith was a pillar of strength. They spent 73 years in the same address in Essex, turning a small home into a five-bedroom dwelling designed for family and entertaining. In all that time, they never had anyone else do work on their home. Even into their 80s, they were on the roof.

Carolyn, who took the married name Fisher, said her parents “were wonderful. We wanted for nothing.”

The Beckers raised their children in St. Clare Parish. Two years ago, they moved to a Parkville condominium, and attend Mass regularly at St. Isaac Jogues in Carney.

“I think we saw everything,” Edwin said, “because we took a different route every time going and coming.”

The Beckers tease each other like a young couple. A recurring theme has kept them pushing one another to live for each other.

“We work hard,” Gertrude said, “but we play hard.”