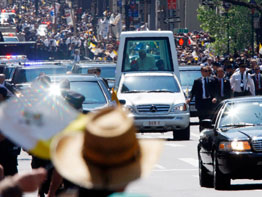 WASHINGTON – Pope Benedict XVI’s recent U.S. visit has been credited with improving his image among Americans, sparking greater interest about him and spurring much-needed evangelization efforts in the country. But those benefits came with a price tag of at least $12.5 million and perhaps much more.

The many dioceses, governments, transportation agencies and hosting facilities involved in the pope’s April 15-20 visits to Washington and New York varied widely in their willingness to provide Catholic News Service with estimated tallies of their expenditures.

Put together, those expenses totaled an estimated $7.3 million. But that figure excludes what is believed to be a significant chunk of the overall expenditures, from the Archdiocese of New York.

It also leaves out the cost of the army of Secret Service agents assigned to the papal detail and expenses for the Vatican, the U.S. Conference of Catholic Bishops, Nationals Park, Yankee Stadium, St. Patrick’s Cathedral, the Basilica of the National Shrine of the Immaculate Conception, the Diocese of Brooklyn, N.Y., the city of New York, Andrews Air Force Base and Port Authority.

Since the combined expenses for the Archdiocese of Washington and the District of Columbia are estimated at roughly $5.2 million, it’s logical to expect the costs for the Archdiocese of New York and the city of New York to be the same or higher, said Jesuit Father Thomas J. Reese, senior fellow at the Woodstock Theological Center at Georgetown University in Washington.

If that theory is correct, the cost of the U.S. papal visit would be at the very least $12.5 million.

Joseph Zwilling, director of communications for the Archdiocese of New York, said he would not speculate how much it cost the archdiocese to host the papal events at St. Patrick’s Cathedral, ground zero, Yankee Stadium or St. Joseph’s Church, and hasn’t decided if he will make those figures public once they have all been tabulated.

However, Mr. Zwilling did say officials at Yankee Stadium waived the rental fee for the April 20 Mass.

The city of New York had not provided CNS with its costs as of April 29, but Newsday reported April 21 that when Pope John Paul II visited New York in 1995 city officials affirmed overtime expenses for police officers to be about $4 million. In a post-Sept. 11, 2001 world with tighter security measures, that figure was likely higher for this trip, the Newsday article said.

The U.S. Secret Service never makes public what it spends on individual security details or how many agents it assigns to any particular mission, said Malcolm Wiley, a public affairs official for the organization.

During the pope’s grueling six-day U.S. visit, he publicly celebrated Mass at Nationals Park in Washington and St. Patrick’s Cathedral and Yankee Stadium in New York, presided over a vespers service at the Basilica of the National Shrine of the Immaculate Conception, met with victims of priestly sexual abuse, addressed the United Nations, spoke to the U.S. bishops and Catholic educators at Catholic University and prayed at ground zero where thousands of Americans died following the 2001 terrorist attacks.

Officials from some of these organizations said most, if not all, the money their groups put out was recouped by ticket sales for transportation to papal events, donations, program advertisements and other fundraising efforts.

“No funds are coming from archdiocesan general funds, parishes or annual appeal collections,” said Susan Gibbs, director of communications for the Archdiocese of Washington. “The visit was funded largely through generous contributions of a number of people who really wanted to contribute as a gift to the people of the United States.”

Most of the District of Columbia’s outlay was for police services.

“We work regularly with our partners in the federal government to reimburse the city during visits from heads of state and we will likely do the same in the case of the papal visit,” said Tracy Sandler, a spokeswoman in the office of Washington Mayor Adrian M. Fenty.

The city of Yonkers is also looking for ways to get reimbursed for some of the estimated $400,000 in expenses it incurred when the pope met with youths, seminarians and disabled youngsters at St. Joseph’s Seminary April 19, but Mayor Philip A. Amicone believes the positive spotlight the papal visit shone on his city makes the price worthwhile, said Amanda Modugno, a spokeswoman for the mayor’s office.

The added bonus for the Catholic mayor was the opportunity to personally meet Pope Benedict backstage at the seminary, Ms. Modugno said.

Though the Washington transit authority spent about $250,000 to accommodate increased ridership during the papal visit, spokeswoman Cathy Asato said she believes the agency regained most of that from fares. The organization sold more than 9,000 all-day special passes for $9 each April 17, the day of the Nationals Park Mass. Its subway system enjoyed its third-highest ridership day in its 32-year history on that date.

Of the $800,000 spent by Catholic University, about half was recouped by donations, said university spokesman Victor Nakas.

“Revenues for much of the remainder came from funds that were already in the university budget for scheduled campus improvements,” Mr. Nakas said. “In some cases we simply accelerated the scheduled improvements.”