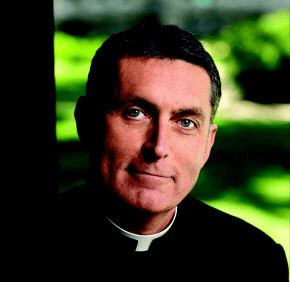 By Paul McMullen
pmcmullen@CatholicReview.org
Twitter@ReviewMcMullen
What charism, Jesuit Father Brian F. Linnane was asked, do the Irish bring to the Catholic Church?
The president of Loyola University Maryland in Baltimore mentioned tenacity in defending their right to worship, and that “deep sense of giving back” that manifests itself in vocations disproportionate to the population.
To make that point, he used another contribution from Ireland: humor.
“My mother’s parents are from Sligo, my father’s mother was from Waterford and my father’s father was from Clare,” Father Linnane said. “They all came (to the U.S.) before the first World War. … I am the oldest son of Joseph and Mary. I had no chance.”
His calling, heritage and the enduring impact of Loyola make Father Linnane the 2014 Hibernian of the Year, an honor he is to receive in Hunt Valley March 13, the Thursday before St. Patrick’s Day, at the 211th anniversary dinner of the Hibernian Society of Baltimore, which has financially supported local students since 1803.
Donal Doyle, president of the society, noted the deep ties of its members to Loyola over the generations, and Father Linnane’s leadership of the university, “ensuring it will continue to be an excellent education provider to young men and women.”
Shortly after becoming president of Loyola in 2005, Father Linnane called for a “Year of the City,” to address issues that affect Baltimore City.
Its residue includes the York Road Initiative, which uses the resources of several graduate programs to improve the lot of youths, civic organizations and businesses on the corridor just east of Loyola.
On his first night on campus, Father Linnane headed down Cold Spring Lane to witness the effects of drug abuse and illiteracy of which he had been warned.
It’s not all grit, of course, at Evergreen. Reitz Arena will be the site of a March 18 symposium on the first year of Pope Francis, and the campus spread west in 2010 with the opening of the Ridley Athletic Complex, named for his late predecessor, Jesuit Father Harold “Hap” Ridley.
“I was pulling out of my driveway on a beautiful Sunday afternoon to head to one of the first games there,” Father Linnane said. “A young couple looked confused, so I gave them a ride to Ridley. They had no connection to Loyola, or the opponent. They were lacrosse fans and wanted to see our new stadium, they just didn’t know where it was.
“The mayor (Stephanie Rawlings-Blake) talks about the universities and hospitals as anchors. We do make a difference, on a fundamental level, with 1,100 employees, but also as an amenity, with academic, intellectual, cultural offerings.”
A hands-on educator and theologian, Father Linnane has taken his curiosity to the street, whether it was in the Boston suburb of Medford, where he was raised; in Ireland, which he has visited “more than 10” times; and in London, where he gained perspective on the fine line between pride and prejudice.
He spent the 1996-97 school year at London’s Heythrop College,” founded by the Society of Jesus in 1614. At a conference in Dublin that listed Irish Jesuits and British Jesuits, he was listed with the latter.
“I photocopied that page,” Father Linnane said, “and sent it to my father, thinking, ‘This will drive him crazy.’ ”
His paternal grandfather was born above Linnane’s general store in Ennistymon, in County Clare, a three-mile stroll from the Atlantic.
While in London, Father Linnane helped at a diverse parish in Kentish Town.
“After Christmas, two kids with cockney accents were dressed in matching rubgy shirts. I asked, ‘Is this what British kids like?’
“ ‘We’re not British, we’re Irish!’
“ ‘Well, what am I?’
“ ‘You’re a Yank.’
“ ‘Your grandparents lived in Ireland, and you’re Irish. Mine lived in Ireland and I grew up in America, like you grew up in England.’
“ ‘Oh, but we’re much closer.’
“Which was true.”
Also see:
School News: Notre Dame University grad earns literary honors
Archbishop Lori begins Lent in Catonsville
Why does the pope ask priests if they cry?
PrevNext