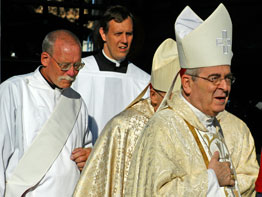 WASHINGTON – Protecting the conscience rights of health care providers should be an issue on which both supporters and opponents of abortion can agree, Cardinal Justin Rigali of Philadelphia said in a letter to members of Congress.

The cardinal, who chairs the U.S. bishops’ Committee for Pro-Life Activities, said his July 18 letter was prompted by reports that the U.S. Department of Health and Human Services is preparing proposed regulations that would require hospitals, clinics, medical schools and other health care institutions to certify they would not discriminate against people who oppose abortion based on their “religious beliefs or moral convictions.”

The proposed regulations have not been made public but were apparently leaked to The New York Times and some members of Congress in mid-July.

“I am not writing to comment publicly on the details of an unpublished draft allegedly leaked from a government agency,” Cardinal Rigali said. “The Catholic bishops’ conference will be glad to provide public comment on a proposed rule if and when it is published.”

But he said the issue “provides self-described ‘pro-choice’ advocates with an opportunity to demonstrate their true convictions.”

“Do they at least hold that ‘freedom of choice’ must belong to everyone, including those who have deep moral concerns in this area?” Cardinal Rigali asked. “Or is the ‘pro-choice’ label a misleading mask for an agenda of actively promoting and even imposing morally controversial procedures on those who conscientiously hold different views?

“Reactions to efforts to reaffirm and implement laws on conscience protection may provide an answer,” he added.

According to the Times, the proposed federal regulations define abortion as “any of the various procedures – including the prescription, dispensing and administration of any drug or the performance of any procedure or any other action – that results in the termination of the life of a human being in utero between conception and natural birth, whether before or after implantation.”

The Times quoted leaders of organizations that support keeping abortion legal as saying the regulations could be interpreted to apply to various forms of birth control.

“This is an interesting charge,” Cardinal Rigali wrote. “For many years, pro-abortion groups have insisted that abortion and related services are ‘basic’ and mandatory aspects of health care. They have opposed conscience clauses … claiming that they protect an irrational ‘refusal’ by a tiny minority of religious zealots to comply with this supposedly objective medical standard.

“Now they have reversed their stand, claiming that conscientious objection to these procedures is so pervasive in the health care professions that policies protecting conscience rights will eliminate access to them,” he added.

Saying that the two claims “cancel each other out,” the cardinal said that if there is such “widespread ethical disapproval” for a procedure that it must be “imposed on unwilling physicians and nurses by force of law,” then it might not be “as ‘basic’ as pro-abortion groups imagine.”

Similarly, he said, “patients with pro-life convictions … deserve ‘access’ to health care professionals who do not have contempt for their religious and moral convictions or for the lives of their children.”

Cardinal Rigali noted that although Congress has passed “numerous laws protecting rights of conscience in health care” since 1973, “none of these statutes has been clarified or enforced through implementing regulations.”

As a result, “some institutions may be violating them without even knowing it, and others who are victims of discrimination may not know that they have any legal recourse,” he said.

“It seems the statutory policy is clear and needed, and at the same time is relatively unknown, misunderstood and unenforced,” the cardinal said. “If the administration is preparing regulations along these lines, it would simply be performing its proper task in an area of law where that is long overdue.”