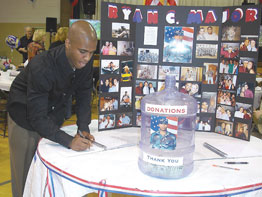 Usually 22-year-old Corey Fick has to lift his best friend Ryan Major out of a wheelchair and place him in bed at night. But lately, Mr. Major, 23, is capable of putting himself to bed, in spite of the fact that his legs and several fingers are missing – injuries sustained in the Iraq War as a squad leader in the U.S. Army. Mr. Fick recalled the first time his friend demonstrated this latest feat.

“Don’t try this at home,” Mr. Fick remembered them joking at the time.

Compassionate acts like carrying his wounded friend, replenishing his cup of ice chips, changing a DVD, visiting every day during the critical weeks when Mr. Major wasn’t aware anyone was there, and sleeping in the same hospital room at in the Walter Reed Army Medical Center in Washington, D.C. to give Mr. Major’s mom a break, is what helped Mr. Fick earn the NCEA Distinguished Graduate Award Jan. 27 from St. Pius X School, Rodgers Forge. The reputation Mr. Fick has earned as “an exceptional young man” was another reason for the honor, said Geri Morrison, principal of St. Pius X, the alma mater of both young men.

“Corey has been at the side of Ryan since this tragedy happened,” she said of the November 2006 war incident when Mr. Major stepped on a land mine, losing one leg instantly and having the second amputated later.

The award is intended to highlight graduates of Catholic elementary schools who, as adults, put into practice the values and ideals they learned in school.

Mr. Major, along with Mr. Fick’s parents, grandparents, brother and friends, were in the audience to see the recipient accept the award.

Although Mr. Fick thinks “Ryan deserves it,” Ms. Morrison believes the Distinguished Graduate Award is “a great way of honoring the friend Corey has been to Ryan.”

And he has – but modestly. With an attitude of simply doing what was placed before him, “something that’s not more than being a friend,” Mr. Fick isn’t ready to take credit where he doesn’t believe credit is due. Others disagree.

“Corey models true Christian behavior every day when he greets Ryan with a smile,” said Ms. Morrison, “and encourages him to persevere through this most difficult physical and mental recovery process. This friendship is truly one in a million.”

Mr. Fick has gone beyond simple caring and catering deeds to the friend he has known since sixth grade. He has locked in Mr. Major’s future – and a job – by establishing Major Scanning Business Solutions, setting up the company so Mr. Major owns 51 percent. The document scanning business for law firms, title companies, and possibly the government, will ensure a financial future and a place to work for the injured soldier.

A foundation was also set up with the hard work of Mr. Fick, and others, as well. The Ryan C. Major Foundation (www.ryancmajor.com) has raised $75,000 through a bull roast and donations to assist the family during rehabilitation.

Mr. Fick admits that people, including himself, can’t possibly understand what his friend is going through. Yet “the best thing about Ryan is the kid has a smile from ear to ear,” he said. “He’s goofy, he’s funny, and I don’t just say that because of what happened to him. I couldn’t go to school for 20 years and know what he’s going through.”

Clearly, Mr. Fick is inspired by Mr. Major’s courage in the face of a challenging situation.

His best friend sums it up best, grinning even when talking about the worse situation: “It’s not the end of the road – it’s just a left or a right.”