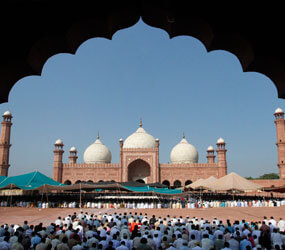 WASHINGTON – Many Westerners and Christians view Islam as a monolithic religion and culture, in much the same way many Muslims view Christianity and the West.

Each group would be wrong, but identifying all of the fault lines is not that simple. This is especially true when it comes to the situation in Pakistan, where a recent series of suicide bombings has killed scores of people, bringing horror to a nation scrambling to avert added disaster in the wake of torrential flooding in its northern, rural regions.

In Pakistan – second only to Indonesia in the number of Muslims who live there – competing versions of Islam are at play, said John Voll, professor at the Prince Alwaleed Bin Talal Center for Muslim-Christian Understanding at Georgetown University.

Most Westerners regard tensions within Islam as a struggle between its two largest branches: Sunnis, who constitute a significant majority of Muslims in Pakistan and worldwide, and Shiites, a distinct minority in most Muslim nations except for Iran and Iraq.

But Voll said the developing fissure is “much more between political-elite, stability-oriented Sunni Muslims and the radical extremists” who are also Sunnis.

A visiting professor at the Georgetown center, Shireen Hunter, said Sunnis are targeting minority Shiites, but the indiscriminate nature of suicide bombings means members of both branches get killed.

Originally, the Sunni-Shiite rift was about who would lead Islam after the death of Mohammed. Shiites wanted descendants of Mohammed, who established Islam, to lead Islam. Sunnis wanted elections to determine who should lead. In the centuries since, the feuds and acrimony that been piled atop of that initial disagreement have grown.

It has gotten to the point, Hunter said, where Sunnis believe “Shiites are worse than heretics and pagans. … Killing Shiites is all right, it is not a crime.”

Pakistan became a nation in August 1947. Regardless of the nature of leadership – elected or military – in the second half of its history, the prime ministers and generals who have run the country “are all from the same class and all have the same kind of political goals,” Voll said. “None of them really want to establish a radical Islamic state. A series of different divides is what’s going on.”

Hunter said Muhammad Zia ul-Haq, who deposed elected prime minister Zulfikar Ali Bhutto in 1977 and later had him hanged, tried to impose a strict interpretation of Islam during his decade ruling the country. But in 1988, Zia was killed in a suspicious plane crash, rendering the effort incomplete and the country at odds with itself.

Voll said Islamic extremists have been opportunistic in carrying out suicide bombings to take advantage of the social instability caused by the floods. They also have capitalized on the weak response by the Pakistani government to flooding victims, he said.

“A number of the extremist Islamist areas were able to get relief and supplies to people in a quicker position than the government,” he said. When an embarrassed government tried to forbid Islamists – who advocate political Islam – from doing anything in the flooded regions, Voll added, the extremists’ reply was, “See? The government doesn’t even want to let us help you.” This led to the ironic situation of the groups causing instability being seen as societal stabilizers in rural areas, he said.

Even so, Voll said, “if all the flooding had disappeared, I would have been willing to predict that between the end of July and the beginning of October there would have been some kind of suicide bombing.”

Voll said that, historically, one of the moderating influences in the outlying regions of Pakistan has been the tribal chiefs who own large plantations and brick kilns, pay meager wages to their workers and charge more for the workers’ skimpy living quarters than they pay in salary. The debt is compounded and passed on from generation to generation, leaving a growing number of families burdened with a debt they are likely never to be able to repay.

The chieftains’ grip has been loosened as of late. Urbanization and a global economy play a role in this, Voll told Catholic News Service Sept. 10, but the chieftains cannot protect their hired hands from unpredictable outbreaks of violence from outsiders using weapons much mightier than what they possess.

“In the old days the elders could gather the clans together and the young men would follow the elders if there was the threat of a conflict,” Voll said. “Now it’s the young warlords who have their own little clans or gangs. The elders can’t do anything with them.”

Pakistan’s median age is steadily dropping, Voll said, and this leads to greater volatility within the nation.

“These tend to be young people’s movements, and a majority of the population is now young,” Voll said. “I think a loss of authority on the part of the elders is the fact that they’re young. They’ve haven’t caught up with the cell phone, the YouTube and Kalashnikov (Soviet-made rifles) generation. The Taliban are basically younger students.”

Pakistan is trying to fuse together very many distinct cultures into one nation with a common purpose, Voll said.

Hunter noted that Islam alone was not enough to keep Bangladesh from seceding from Pakistan in 1971, and that there is deep resentment against the Punjabi ethnic group, which controls much of Pakistan’s political, military and social power.

Even with fragmentation and extremism, Voll said, only about 10 percent of the population thinks Pakistan should attain some kind of “Islamic republic” status. A much higher percentage want government recognition of the nation’s religious character, according to Voll, but disagree on how that could be accomplished.

One tactic to strengthen the government’s hand would be to rebuild the flooded areas, such as “building really new schools – not just tacking up cardboard over the windows of the old schools,” Voll said. “I think it becomes essential that the Pakistani government has resources to make dramatic progress.”