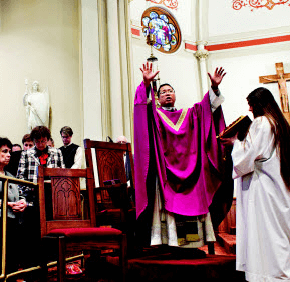 Less than three years after Father James Sorra arrived as administrator of St. Michael the Archangel, Overlea, its other leaders praise him for increasing the level of spirituality at the church and school.

Corinna Sibiski, director of development at St. Michael the Archangel, said Father Sorra has brought “a genuine spirituality to the parish.”

“It’s more about bringing people to a deeper relationship with Jesus Christ. Father Sorra set the tone for that,” said Sibiski, a St. Michael parishioner whose two children are graduates of St. Michael the Archangel School. “I think if people are looking for a truly spiritual Catholic (church) they would find it here.”

Father Sorra said what makes the parish of 1,980 families unique is their faith.

“This is a very strong faith-based community,” said Father Sorra, who noted that a handful of former parishioners and/or school graduates are now priests and religious, Father Sorra said.

Kathleen Klein, a parishioner and president of the school advisory council, called the parish “a very welcoming place; it’s a very good community.”

“We strive very hard to show that, in the things we do as a community within the school and the church itself,” Klein said.

These committees are “fueled by committed leaders who take all of these things very seriously – and joyfully – in the school.”

The parish also has a presence in the Holy Name Society, Knights of Columbus, Society of St. Vincent de Paul, Beans and Bread and bereavement ministry.

Each Mass has “its own flavor,” depending on the time, ethnicity of parishioners and music, Sibiski said.

“The school keeps the young people coming and a younger generation coming into the church, but, I think that we do have the stability of the older people who have grown up in this parish,” Sibiski said.

Parishioners Olga and Dante Petrolini were honored as the longest-married couple in the Archdiocese of Baltimore during the World Marriage Day Mass at the Cathedral of Mary Our Queen in Homeland Feb. 12. The Petrolinis have been married for 73 years.

“It’s those kind of stories that make (the parish) special,” Sibiski said.

During his tenure Father Sorra said he has worked to strengthen “the Catholic identity of the school” by having students regularly attend Mass, and also through prayer and institutional knowledge.

“(Even) non-Catholics who come (to the school) are happy to be at a values-based education,” Father Sorra said.

The student body is 85 percent Catholic and most students are also parishioners, said Father Sorra, who expects each student to commit the 10 Commandments to memory. On occasion, he stops students in the hall and asks them any given commandment.

Pat Kelly, principal of St. Michael the Archangel School, said Father Sorra worked with her to find time in student schedules for weekly Mass, instead of once or twice a month.

“It’s a good working relationship,” Kelly said. “This guy’s young, he’s energetic, he’s made a positive impression on the children.”