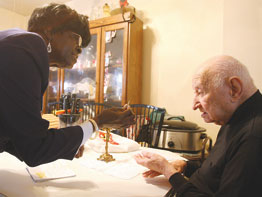 For years, Horace Wisniewski faithfully brought Holy Communion to the sick and dying in Dundalk. But after a heart attack slowed him down about a year ago, the roles changed. Now the 90-year-old extraordinary minister of Holy Communion from Sacred Heart of Mary, Graceland Park, relies on others to bring the Eucharist to him.

On a recent spring morning, one of Mr. Wisniewski’s fellow parishioners, Mary Branch, arrived on his Dundalk doorstep for her weekly visit. Carrying a consecrated host inside a gold pyx, Ms. Branch exchanged a few pleasantries before gently unfolding a white lace cloth and placing it on her friend’s table along with a golden crucifix.

Dolly Morris, director of health care ministry at Sacred Heart of Mary, said the sick, the elderly and people in nursing homes are “in awe” of the time and effort parishioners take to be with them. It’s a way of helping those who can’t be in church stay connected to their parish, she said.