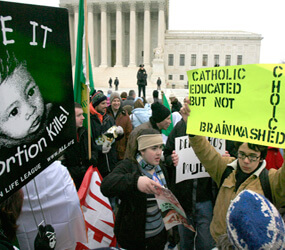 WASHINGTON – Members of Congress and some religious groups are touting newly proposed legislation as a big step toward common ground on abortion, but a staff member of the U.S. bishops’ Secretariat of Pro-Life Activities said the bill should be called “the Planned Parenthood Economic Stimulus Package of 2009.”

The Preventing Unintended Pregnancies, Reducing the Need for Abortion and Supporting Parents Act, introduced in the House July 23 by Rep. Tim Ryan, D-Ohio, “cannot fulfill the promises in its title,” said Susan E. Wills, assistant director for education and outreach in the pro-life secretariat.

Writing July 24 in Life Issues Forum, a biweekly column produced by the secretariat for Catholic newspapers, Wills said the bill “is dressed up with some funding for after-school programs, and some … efforts to provide support for pregnant students,” which she called “very poorly crafted.”

But she said it also “substantially increases funding for the federal Title X family planning program … , denies state choice, making family planning services a mandatory Medicaid entitlement in all states, and greatly expands family planning eligibility under Medicaid to all women who are eligible under state law for prenatal, labor and delivery care.”

Wills said the “real abortion-reduction bill in Congress now is the Pregnant Women Support Act,” introduced in the House and Senate this spring.

Cardinal Justin Rigali of Philadelphia, chairman of the U.S. bishops’ Committee on Pro-Life Activities, has urged members of Congress to co-sponsor the Pregnant Women Support Act, which he said provides “many kinds of life-affirming support for pregnant women and their unborn children” and “reaches out to women with a helping hand when they are most vulnerable, and most engaged in making a decision about life or death for their unborn children.”

At a July 23 news conference, Ryan said the Preventing Unintended Pregnancies, Reducing the Need for Abortion and Supporting Parents Act offers “common ground on one of the most divisive debates in America.”

“It’s my belief that if we are really serious about reducing the need for abortions in this country, then we need to promote prevention in order to achieve that goal,” he said. “People may – and likely will – continue to have disagreements over this issue, but we must still work together in the instances where we agree.”

Also at the news conference was Rep. Rosa DeLauro, D-Conn., a co-sponsor of the legislation, who said the bill “came about through listening and talking instead of shouting past each other.”

Among the groups or individuals with Catholic ties who expressed support for the legislation were the National Coalition of American Nuns; the national Catholic social justice lobbying group Network; Catholics in Alliance for the Common Good; Lisa Sowle Cahill, a theology professor at Boston College who is a past president of the Catholic Theological Society of America; and Charles C. Camosy, an assistant professor of Christian ethics at Fordham University in New York and coordinator of the university’s Curran Center for American Catholic Studies Conversation Project.

Other backers include the Planned Parenthood Federation of America, NARAL Pro-Choice America, the Episcopal Church, the United Church of Christ, the General Board of Church and Society of the United Methodist Church, and the Jewish Council for Public Affairs, which represents 14 national Jewish organizations.

“This legislation gives me hope that we can finally begin to move beyond using pregnancy as a political wedge issue and to focus instead on providing women and families with the resources they need for healthy pregnancies and babies,” said Sister Simone Campbell, a Sister of Social Service who is executive director of Network. “It is time to work together to eliminate political posturing on this issue.”

But Deirdre A. McQuade, assistant director for policy and communications in the pro-life secretariat, said a close reading of the Ryan-DeLauro bill shows that “whatever strengths are found” in it “are even stronger in the Pregnant Women Support Act.”

Although both bills expand some services for pregnant women, the Ryan-DeLauro legislation defines pregnant women only as those women who have already chosen to give birth, rather than including women still undecided about whether to have an abortion or carry the child to term, she said.

“Everywhere there are resources, services or information” offered to pregnant women in the Ryan-DeLauro bill women who are on the fence about whether to have an abortion will not be able to access those resources, McQuade said. “That definition excludes women that the Pregnant Women Support Act would reach out to.”

Some provisions of the Ryan-DeLauro bill could even increase the number of abortions performed in the United States, McQuade said.

The Pregnant Women Support Act would allow states to cover unborn children and their mothers under the State Children’s Health Insurance Program, known as SCHIP. But the wording of the other legislation “could contribute directly to paying for abortions in the 17 states that use SCHIP money to pay for abortions,” she said.

Although the use of federal funds to pay for abortions is prohibited, states can use the part of the SCHIP funding they contribute to do so, under the Ryan-DeLauro proposal.

In addition, the Ryan-DeLauro legislation does not include provisions for informed consent before women undergo an abortion that are contained in the Pregnant Women Support Act.

A woman considering whether to have an abortion needs to be informed “about what she is about to undergo,” McQuade said. “She needs to go in with both eyes open.”