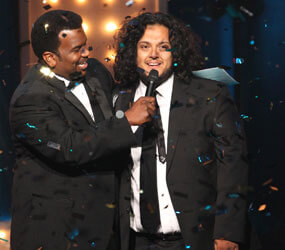 LOS ANGELES – On Aug. 9, as television viewers tuned in to find out who would be the 2010 “Last Comic Standing,” finalist Felipe Esparza was walking back and forth on an NBC stage, microphone in his right hand, the other arm swinging loose. He was wearing an unbuttoned sports coat, a narrow black tie and a pink untucked shirt over baggy pants. The half-casual, half-formal ensemble was capped off by retro sneakers.

The young man, with a full head of curly black hair and an Amish-style beard, was talking about his Mexican father who liked to patrol the neighborhood for discarded furniture to bring home and fix. One day he returned with what young Felipe and his five brothers and one sister thought was the most humongous television set they’d ever seen with a dial that had 500 – yes, 500 – channels.

“When I got older, it didn’t have 500 channels,” the stand-up comic deadpanned. “It was a knob from the oven. My favorite channel was 300 degrees. It was a hot show.”

The routine was interrupted frequently by loud laughs and heavy clapping from the audience. Afterward, Greg Giraldo, one of the judges, told him: “Felipe, you are definitely my favorite Mexican-Amish comedian. And you’re one of those guys that’s impossible not to love.”

The TV and online audiences apparently agreed. They voted Esparza the “Last Comic Standing,” awarding him the $250,000 grand prize along with a one-year development deal with NBC.

But Esparza’s life has not been a laughing matter. He grew up in a housing project. His father was a welder, while his mother was employed by public schools as a playground worker. And it was no small matter for the struggling couple with seven kids to keep Felipe in line.

He became involved with a gang “just for the drugs,” started drinking at 15 and by 19, he said, he was an alcoholic.

His mother, fearing that her son would soon wind up another drive-by victim, went to the priest at Dolores Mission, their parish. Jesuit Father Greg Boyle came to the family’s house and talked to Esparza, persuading him to turn in a weapon and telling him about a drug treatment center that had helped other youths with their addictions.

Esparza wound up staying at the center for more than a year and returned for another six months as a volunteer. While he was going through the 12-step program, the priest visited him and offered encouragement.

Now, he said he has been sober for more than 12 years. He believes his time in the center helped him to focus on himself and realize what his dreams were.

His first real stand-up gig came when he was 24 at a natural food coffee shop in Los Angeles where would-be comics could perform after spending $3. He would buy the cheapest thing on the menu, a $2.50 “nutburger” and a soda. And every Tuesday night, the owner would film the comedians so anybody who had the local access channel on cable could catch the entire show. “That was my first TV break,” he said.

From there he performed weekly for a tough audience at a biker bar where he said “every week for me was the same audience, and every week they heckled me. The better I got at comedy, the better the audience was at heckling me. But it helped me with my joke writing,” he told The Tidings, archdiocesan newspaper of Los Angeles.

And with only 18 months of stand-up under his belt, he scored a really big break, appearing on Showtime’s “Diamonds in the Rough.”

Esparza got in the habit of writing every day. Since he didn’t – and still doesn’t – drive, many of his best ideas come from riding the bus. He professes not to know what makes a really good stand-up comic today.

To be a successful comedian, one has to persevere and struggle – and “create yourself as an artist,” he declares, while to be a good comic, “you write some material, go up on stage and try it out; go back home and throw it in the trash can. And the next day do it again.”