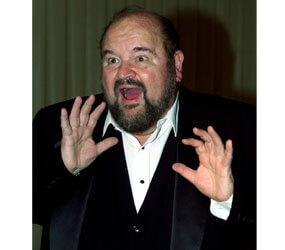 WASHINGTON – Dom DeLuise, the Catholic comic actor who mastered the double-take look of surprise on film, died May 4 at St. John’s Health Center in Santa Monica, Calif., after a long illness. He was 75.

First bursting into national consciousness with guest appearances on TV’s “The Gary Moore Show,” he cemented his fame with his appearances in some of Mel Brooks’ zaniest movie spoofs, including “Blazing Saddles,” “Spaceballs,” “Silent Movie” and “History of the World Part 1.”

DeLuise also partnered with Burt Reynolds in several movies, among them “Smoky and the Bandit II,” “The End,” “The Cannonball Run” and “Cannonball Run II.”

In a 2006 interview with Monsignor James Lisante for the priest’s TV show, “Personally Speaking,” DeLuise told of his fealty for Mary.

“People give me Blessed Mothers,” DeLuise said in an interview “I have one here, I have one there. I have them all over the house.”

“I said to my wife – before we had all these Blessed Mothers – ‘I want a Blessed Mother, but only a small one.’ We pull over to the side of the road, and there’s a Blessed Mother. But the smallest one was only about 3 feet (tall).

“I don’t mind them. I like them. They give me comfort,” DeLuise noted. “The Blessed Mother is someone that I pray to all the time, and in fact, I use her as a mantra. When I’m in my car and there’s traffic, ‘Hail Mary, full of grace …,’ ” he said, reciting the complete prayer. “I say it all the time. It calms me down.

“When I was having surgery, and I was uncomfortable, I said 11 of those in a row, and it just calmed me down,” he continued.

“I like the Blessed Mother, and I sure hope to hell she likes me.”

When the TV variety show and the daytime chat show were staples of the small screen, DeLuise was a much-sought-after guest. He appeared on such programs as “The Hollywood Palace,” “The Jackie Gleason Show,” “The Smothers Brothers Comedy Hour,” “The Carol Burnett Show,” “The Glen Campbell Goodtime Hour,” “The Flip Wilson Show,” “The Dean Martin Show,” “The Merv Griffin Show,” “The Mike Douglas Show,” “Tony Orlando & Dawn” and “Dinah’s Place,” hosted by Dinah Shore. DeLuise also racked up 20 appearances on “The Tonight Show” with Johnny Carson as host, and took his turn on the TV game-show circuit, including “The Match Game” and “Hollywood Squares.”

Much of DeLuise’s work over the past 15 years had been in children’s media, acting on TV series, doing cartoon voice-overs and writing books. DeLuise wrote several cookbooks and children’s books and occasionally appeared as a television and radio chef.

He or his voice had been featured in such movies and TV shows as “A Troll in Central Park,” “The Magic School Bus,” “Ren & Stimpy,” the “All Dogs Go to Heaven” and “An American Tail” series of movies and TV spinoffs, “Duckman,” “Sabrina, the Teenage Witch,” and “Bongee Bear and the Kingdom of Rhythm.”

His last film role was a cameo in a 3-D shock-movie spoof, “Horrorween,” which is still filming.

Former film publicist Robert J. Elisberg, writing on the Huffington Post Web site, said that in his 15 years of doing favors for Hollywood types, DeLuise was one of only two actors to have written thank-you notes. The other was John Houseman.

“Dom DeLuise was a big man in every way,” said Brooks in a statement. “He was big in size and created big laughter and joy. He will be missed in a very big way.”

His wife of 43 years, actress Carol Arthur, and their three sons, all actors, Peter, Michael and David, were at his bedside when he died. They survive him, as do three grandchildren.