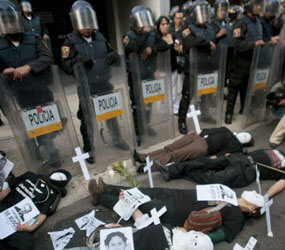 Speaking on Capitol Hill March 5, Monsignor Hector Henao Gaviria said Colombia’s civil war has had a “very grave humanitarian impact,” especially on displaced families. Monsignor Henao, head of Caritas Colombia and the social affairs commission of the Colombian bishops’ conference, said there must be a coherent, joint and “negotiated solution to armed conflict” that includes the participation of civil society.

Colombia is second only to Sudan as a country with the most internally displaced people, said several Colombian community leaders who also participated in the discussion on Colombia.

The leaders also discussed recommendations detailed in a February letter to President Obama, in which 100 representatives of human rights and peace-building organizations urged the U.S. to reform its policies to defend human rights and uphold democracy in Colombia.

The letter urged President Obama to rework the U.S.-Colombia anti-drug policy to “acknowledge the principle of shared responsibility between producer and consumer countries in facing this scourge.” Colombia is Latin America’s largest producer of coca, the main ingredient of cocaine, which is transported north and consumed in the United States.

A negotiated solution to end the civil war would help the effectiveness of the joint anti-drug policy, the letter said.

The letter called on President Obama to support Colombia’s judicial branch and oversight agencies “to ensure an end to impunity for the actors in the armed conflict and their allies.”

It also urged the U.S. and Colombia to enter into a “mutually beneficial fair-trade agreement based on respect for human rights and sustainable development, ensuring not only the life and rights of trade union leaders but also equitable treatment for ethnic minorities, women, peasant farmers and Colombian producers.”

After the Capitol Hill discussion, Monsignor Henao told Catholic News Service he expects the Obama administration to cooperate for “peace-building and human rights in our country.”

He said the Catholic Church in Colombia is working to end the drug trade through its advocacy and awareness programs and is providing training programs for coca farmers so they can have more career opportunities.

Monsignor Henao said U.S. Catholics could help by understanding the consumption side of the drug trade and by focusing on treatment of addicts.