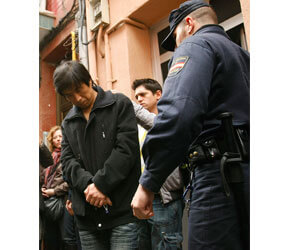 WASHINGTON – Students at Catholic universities across the country are united in a common goal: working to eradicate human trafficking domestically and internationally.

Caryl Nunez, a political science student at the University of Dayton in Ohio, told Catholic News Service it was comforting to know “it’s not just me interested” in spreading awareness about human trafficking. Students from all majors are interested in the topic, which she called a sign of hope.

Students are playing a significant role in spreading awareness, said Nunez, who is from Miami. “Students today are interested, surprised and acting.”

A wide range of estimates on the scope and magnitude of modern-day slavery exists. The U.S. State Department estimates that some 800,000 people are trafficked into slavery within or across national boundaries annually, including the United States.

The International Labor Organization estimates that at any given time 12.3 million adults and children are in forced labor, bonded labor or commercial sex networks worldwide.

Hanh Nguyen, who is majoring in English and justice and peace at Denver’s Regis University, told CNS she got involved in the issue because it “is such a terrible injustice that cannot be ignored. Many of the girls who are trafficked are Vietnamese – this brings it closer to home because of my heritage.”

“The fact that girls my age (and) girls so much younger than (me) are being exploited in such a horrific, inhumane way has haunted me … and I feel a pull to do all I can,” Nguyen said.

Nathaniel Lange, a philosophy student at Regis University from LaPorte, Ind., told CNS that to raise awareness, the university’s chapter of the Somaly Mam Foundation has a long-term goal “to actually create a class with a curriculum about human trafficking.”

The foundation is named after a woman from Cambodia who is a former trafficking victim and now is an activist committed to ending the practice.

“We’ve had discussions with staff and faculty members who are excited about the potential class and have already begun to integrate materials about human trafficking into their current curriculum,” Lange said.

Angela Jones of Silver Spring, Md., who is a law student at St. Thomas University in Miami, said it was important for people to really understand human trafficking exists in the United States.

Many prostitutes are forced into that work because they are trafficking victims, she said.

Alisa Bartel, a University of Dayton psychology major, told CNS that advocates are doing a “fairly decent job” at spreading awareness about trafficking, but she feels more should be done to educate young people about the issue.

Bartel suggested nongovernmental agencies create infomercials that could air on MTV and be put on Internet sites frequented by youths.

But beyond disseminating information about the issue, Bartel, who is from Springfield, Ill., said people must be shown how they can address the problem.

Communities need to address the lack of resources available for victims, she said. There are few shelters in the U.S. dedicated to caring for trafficking victims and their psychological and physical needs, she said.

Seattle University student Amanda Rinkel, a women’s studies major from Puyallup, Wash., writes about trafficking, including discussing the movie “Taken” about the modern-day slave trade on her blog for the campus paper. She also wants to organize a campus lecture on trafficking.

To learn more about the issue, she attended a two-week training workshop given by the Not for Sale Campaign, an international organization founded by University of San Francisco professor David Batstone.

He and his family had dined regularly at an Indian restaurant in Berkeley, Calif., for years until 2000, when they read a series of newspaper reports exposing the restaurant’s owner as a labor and sex trafficker.

“I’d been working in social justice and human rights ever since I was in college,” Batstone told Catholic San Francisco, news paper of the Archdiocese of San Francisco. “But … what do you do when you find slavery in your own backyard?”

He researched the issue, sometimes enlisting his students to help. From those beginnings, the Not for Sale Campaign has grown and has operations in South America, Asia and Africa. The organization researches workplaces like massage parlors that could be fronts for trafficking. It also provides help to victims of trafficking.

Catholic San Francisco reported that in the United States, trafficking victims come from at least 35 different countries, though most of them are from China, Mexico and Vietnam. States that have large port cities or share a border with Canada or Mexico have the highest incidence of trafficking.

Most trafficking victims work in agriculture, domestic service, factories, and the restaurant and hotel industries.

Batstone said a wide variety of circumstances lead to adults and children becoming trafficking victims. For example, a family sells their child to be a house servant with the promise he or she will get an education; a guerilla army attacks a village and kidnaps the children to serve as soldiers; or an individual is offered a job and a salary advance, and after accepting the work he or she discovers the pay is low and there’s no way to ever work off the advance.