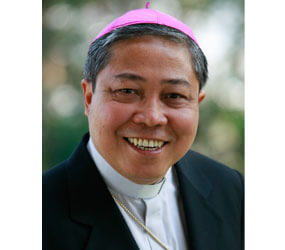 PORT-AU-PRINCE, Haiti – The loss of key leadership and the destruction of up to 70 parishes during the Jan. 12 earthquake exposed weaknesses in the structure of the Catholic Church in Haiti, said the papal nuncio to the beleaguered Caribbean nation.

At the same time the disaster offers Catholic leaders the opportunity to identify new leaders to carry the church into the future, Archbishop Bernardito Auza told Catholic News Service during a pair of interviews in early February.

“In the process of renewal, in the process of getting ourselves better, there have been lots of observations about the weaknesses in the local church,” the 50-year-old Philippine-born archbishop said. “That will be looked into as we reconstruct.

Three Port-au-Prince archdiocesan leaders – Archbishop Joseph Serge Miot, Monsignor Charles Benoit, vicar general, and Father Arnoux Chery, chancellor – were killed in the quake. The death of Archbishop Miot was particularly devastating because his concern for the poor made him a beloved figure among Haitian Catholics.

The Vatican has appointed Auxiliary Bishop Joseph Lafontant of Port-au-Prince as apostolic administrator of the archdiocese.

Archbishop Auza confirmed Feb. 9 that seven priests, 31 seminarians and 31 men and women religious died in the archdiocese. In addition, 60 parishes were destroyed.

In the neighboring Jacmel Diocese, southwest of the capital, the archbishop said, the diocesan administrator reported that the cathedral is “very seriously damaged,” 10 parishes have been destroyed or seriously damaged and 30 chapels and mission stations must be rebuilt.

The number of people buried in mass graves after the quake topped 170,000, according to a Feb. 10 statement from Haiti President Rene Preval.

As the church struggles to remain a viable entity in the lives of its members remaining in the earthquake zone, it also faces the prospect of having to find parishioners who have been forced to relocate to tent camps or who have fled the city for outlying areas.

Some priests have begun celebrating Mass in open spaces near collapsed churches, Archbishop Auza said. But such locales are crowded with people left homeless by the earthquake and often are used as distribution sites for aid, leaving little space for people to gather for Mass, he said.

The next two months will be crucial to the Haitian church’s future, the archbishop said in mid-February. He said delegations of bishops from around the world are planning to visit the country and begin assessing how best to respond to the crisis affecting the church.

Among the assessment teams will be a delegation from the U.S. Conference of Catholic Bishops, headed by Archbishop Timothy M. Dolan of New York, Archbishop Auza told CNS. Dates for the delegation’s visit were not immediately available.

Archbishop Auza, the Vatican’s top diplomat in Haiti since August 2008, said “tough decisions” will have to be made in determining the priorities for the Haitian church. Individual bishops’ conferences may want to sponsor specific projects, but the archbishop said those desires should be balanced with priorities established by the local church.

“We have to start the reconstruction with very solid principles to avoid confusion and disappointments and ill feelings of those who are willing to help,” he said.

Near the top of the list is rebuilding the country’s major seminary in Port-au-Prince. It was reduced to rubble by the magnitude 7 quake.

“We cannot leave the seminarians hanging around for a long time without an institutional framework,” the nuncio said.

The archbishop is just as concerned that the rebuilding campaign should be transparent so that funds are spent according to whatever priorities are established. He suggested that a commission be formed to oversee the expenditure of funds and ensure that the projects undertaken match the priorities established from the start.

“The problem of having a commission for inspection would probably be a little bit complicated, but I’m sure we could find a solution if this were to be the option,” he said.

The country’s poor infrastructure coupled with the lack of heavy construction equipment likely will slow the rebuilding process, the archbishop said. He said he also expects that the government red tape will play a role in how quickly some of the reconstruction can begin.

Given the vastness of the problems and the clear need to rebuild, “I think the state would be willing to move fast because that would also be in the interest of the state,” he said.

Archbishop Auza expects to play an important role in helping the church maneuver through what remains of the Haitian government bureaucracy, which was left in shambles by the earthquake. All but one government building – the ministry responsible for communications and culture – were leveled.

Preval, Haiti’s president and a Catholic, continues to work from a branch office of the country’s national police force near the international airport. Both the presidential palace and his private residence were destroyed. But Preval has been criticized inside and outside of the country for stepping back and letting foreign governments and aid agencies direct the recovery operation.

Archbishop Auza, whose position as papal nuncio makes him the head of the diplomatic corps, said he believed the Haitian president was doing as well as he could under the circumstances.

“Even in ordinary times the government … (must have) basic things, underlying things which are needed in order to be efficient in times of emergency. The Haitian government just didn’t have it before the earthquake and much less during and after the earthquake,” he said.