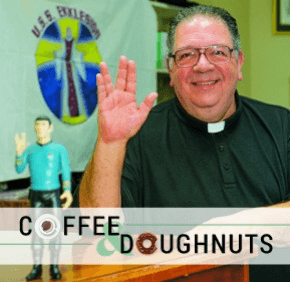 By Paul McMullen
pmcmullen@CatholicReview.org
The Catholic Review recently spoke with Pallottine Father Bernard P. Carman, pastor of St. Leo the Great in Little Italy and Star Trek fan.
CR: What and where are your Catholic roots?
FATHER CARMAN: Dad’s family (Italian and Irish) always was Catholic. Mom’s (English, Finnish, German, Blackfoot Native American) was Baptist, but then Grandmom Berglund, the “matriarch,” had a fight with the minister and made the whole family become Lutheran. Mom was a registered nurse, and became Catholic through the agency of fellow students in nursing school.
My neighborhood in Camden, N.J., was somewhat integrated. When Mom died in 1988, a black neighbor, Gloria Grant, though she was not very well, came to her viewing. She told me, “I had to come because your parents were color-blind.” We were among the few kids allowed to play with hers and visit each other’s homes.
CR: Where have you served?
FATHER CARMAN: The previous eight years were in Brooklyn, N.Y., in a Hispanic parish. I served two three-year terms (1985-88 and 2000-2003) as rector of the Pallotine Seminary in Prince George’s County, and served my community in Rome as General Secretary for six years in the 1990s.
CR: What do you like about Little Italy?
FATHER CARMAN: It is increasingly rare to find a well-defined ethnic community. Even here the close-knit core of families is diminishing, but there still is a good spirit, which newer people are entering. My hope is that the senior members will accept younger parishioners as “apprentices” and ease them into the devotions, activities and celebrations of the Little Italy community.
CR: Star Trek Beyond, the next movie in the franchise, opens nationwide July 22. What made you a “Trekkie”?
FATHER CARMAN: I was in the eighth grade when the first episode aired, Sept. 8, 1966. My favorite character from the start was Spock. I resonated with his identity struggle – the often opposing forces within him. I love that the Vulcan peace sign is in fact the form of blessing in the synagogue. The hand represents the Hebrew letter, “shin,” first letter of “Shaddai-Almighty” and of “Shekinah” the Divine presence. During my time in Rome, I joined the Star Trek Italian Club. That’s how I got interviewed for the fan documentary, “Trekkies 2.” It’s on Netflix.
CR: You can preach in Italian, Spanish, German and American Sign Language. Contrast the concept of the universal church to the values espoused in the Star Trek series.
FATHER CARMAN: Star Trek provides some good parables for Gospel messages, but in general, it does not handle religion well. Too often the version of religion portrayed or, sometimes, criticized, is a shallow, vague notion of what religious experience and life really are. Too many (on-screen) believers live at a low level of understanding, commitment and spiritual experience. It’s sad that Star Trek, like the media and entertainment industry in general, accept this as the norm and the essence of religion.
CR: Favorite saint?
FATHER CARMAN: First, St. Vincent Pallotti (1795-1850), the founder of the Society of the Catholic Apostolate. Our charism is to help all to be aware of the universal call to the apostolate. We are images of God, who is love. From our very nature we are called to live and spread love, the essence of the Gospel.
Then, my patron, St. Bernard of Clairvaux. He was a great holy man, preacher and devotee of the Blessed Virgin, a model of deep faith and courageous love.
Click here for an article and video from the parish’s St. Anthony Festival.  Click here for movie review of ‘Star Trek Beyond.’

Coffee & Doughnuts with Pat Healey of the Baltimore Blast