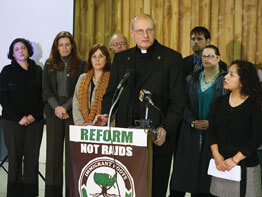 “We just like to put on a Catholic perspective on looking at immigration reform to bring our sense of fairness, our sense of justice to those who are immigrants,” Bishop Rozanski said. “It’s necessary to get out the message of the Gospel of Christ and to bring a sense of conversion, a sense of reflection on those teachings.”

The coalition is expected to have about 15 members, said Maria Johnson, director of the archdiocesan Office of Hispanic Ministry.

She said the coalition would work to help parishioners recognize the need for immigration reform, an often divisive issue, and urge lawmakers to back it.

“It’s our duty as Catholics to support immigration reform so immigrants have dignified lives in this country,” Ms. Johnson said.

The coalition grew out of an immigration conference co-sponsored by the Baltimore and Washington archdioceses last fall.

Members of the coalition say they’ll seek to dispel myths and replace anti-immigrant sentiments with acceptance.

Father Wojtek, a coalition member whose parishioners are overwhelmingly Hispanic, said the coalition must advocate on behalf of immigrants and evangelize Catholics.

“Some of our own people don’t get it when Jesus says, ‘I was a stranger and you welcomed me,’ and unfortunately, we have to preach to the choir, to our own Catholic people and sometimes even the priests, you know, to help them understand the reality.”

On Jan. 29, advocates for immigrants released what they called proof that Hispanics had been unfairly targeted outside a 7-Eleven in Fells Point a year ago.

CASA de Maryland, which released the video, said it showed U.S. Immigration and Customs Enforcement agents rounding up and detaining 24 Latino men, while several black and white people walked by without being disturbed.

“We are living in contradictory times. On one hand, you have the first president of African descent in the world outside Africa, but on the other hand, you have the federal government engaging in racial profiling,” Gustavo Torres, executive director of CASA de Maryland, said in a statement.

Catholic leaders say President Barack Obama’s election renewed hope for comprehensive immigration reform that has failed in the past.

Formation of the coalition comes after Archbishop Edwin F. O’Brien called for bold action on immigration.

“Comprehensive and just reform of our immigration system cannot be delayed,” he wrote in a Jan. 15 column in The Catholic Review.

Among reforms Catholic leaders have sought are: a path to citizenship for the estimated 12 million illegal immigrants in the United States; a temporary guest-worker program; steps to stabilize immigrants’ status and keep members of families together; and an end to workplace raids that often separate parents from their children.

Father Joseph L. Muth Jr., a coalition member and pastor of St. Matthew in Northwood, said concerns about illegal immigrants and workplaces that hire them as cheap labor could be addressed through comprehensive immigration reform.

Father Muth, whose parishioners are from more than 40 countries, said the Catholic Church has a proud tradition of welcoming immigrants and noted priests greeted new immigrants at the Baltimore harbor about a century ago.

“It’s important,” he said, “for people to meet immigrants to see the human story of what they encounter, to see the drive and the hope and the dreams that many immigrants have, and to understand the reasons why people come here in the first place, arriving here as refugees or seeking political asylum.”

“Our country,” Father Muth continued, “is the safe haven where people want to come to kind of recreate and rebuild their lives, and the church is a part of that, and the church has always been welcoming the stranger, as the Scriptures say.”