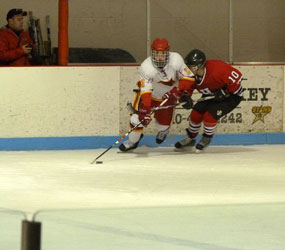 Ice hockey might be fast-paced and even brutal at times, but the winter sport has elicited a warm response from fans and players.

“What’s not to love?” quipped Calvert Hall head coach Mike Shramek about a month before the official Oct. 1 start of the Maryland Interscholastic Athletic Association season.

The New York native said that as a boy, he looked forward to 6 a.m. practices on Saturdays.

“I consider myself someone who loves all sports in general, but when I began playing hockey, it was the one sport I loved to practice,” said Shramek, who is entering his 14th coaching season at the Towson school. “It was just pure, pure enjoyment. I loved every minute.”

Although it’s been nearly 15 years since the Baltimore Bandits represented Charm City in the American Hockey League (the last game for Baltimore was played in 1997), enthusiasm and passion for the sport continue to grow. That enthusiasm will likely be present in Baltimore’s 1st Mariner Arena Sept. 20 when the nearby Washington Capitals face off against the Nashville Predators in a preseason game dubbed the Baltimore Hockey Classic.

“Enthusiasm is easy when you’re part of the greatest game there is to play,” said Rob Merson, head ice hockey coach for Mount St. Joseph High School in Irvington. “When you see firsthand the effort put forth by our athletes even before they hit the ice, you can’t help but to be excited for the upcoming season.”

Arlington, Va., resident Peter Robbio let The Catholic Review know via Twitter that he will be attending the Caps preseason game.

“I describe myself now as a diehard Caps fan,” said Robbio, who attends Our Lady of Lourdes Church in Arlington and who grew up a Bruins fan.

Robbio traveled to Baltimore Sept. 2-4 to attend the city’s inaugural Grand Prix and is looking forward to a return trip.

“I was pleasantly surprised,” he said. “Baltimore’s a cool city, and it’s only 50 minutes away.”

Even clergy share a passion for the fast-paced sport. Resurrectionist Father James Donohue, who is chairman of the theology department at Mount St. Mary’s University in Emmitsburg, is in his 16th year of coaching the Mountaineers.

“I’m hard-pressed to think of anything else I enjoy as much,” said the 56-year-old native of Canada, who also plays on an over-50 team in Laurel known as the “Aging Bulls.”

When commenting on the Sept. 7 plane crash that killed 44 people, including most of Russia’s Lokomotiv ice hockey team, Father Donohue noted the cross-pollination in hockey at the international level. He said that although the plane crashed 160 miles northeast of Moscow, many people recognized the names of players because several had played for the NHL.

“We who are close to the sport are a close family,” said Mount St. Joseph’s Merson. “All involved with this great sport know how much discipline, dedication and desire it takes to achieve such a high level of play as all the guys who were on that plane.”

Calvert Hall senior Brett Gleiche knows about dedication, having played hockey since he was 5 years old.

“It’s fast paced and it’s a great teamwork sport, although each individual has a chance to make a difference on the ice,” said the 17-year-old forward, who has played varsity all four years.

He won’t be attending the preseason game, but looks forward to attending regular season Caps games and cheering on Alex Ovechkin.

For those, like Robbio, who do attend the Baltimore Hockey Classic, it will be a chance to see both Caps coach Bruce Boudreau and Predators Coach Barry Trotz revisit Charm City.

Boudreau played for the AHL Skipjacks, who were in Baltimore from 1981-1993, in the 1980s and Trotz was the team’s final head coach before the franchise relocated to Portland, Maine.

“He is a person who toiled in the minor leagues for decades,” said Donohue. “He was a very successful player and then coached and then got this opportunity (to coach the Caps). People found out he’s got a lot of hockey knowledge, but he’s also a really good person, and that’s an attractive side of the Caps other than the fact that they have a really good team.”

The priest, who sees the value of ice hockey in keeping people in shape, having fun and working together, said the Caps have a great team and are a Stanley Cup contender this year.

He said enthusiasm for the sport (both playing and watching) has increased dramatically since he first came to the area 15 years ago.

“Even as a casual fan, you can really get bitten,” he said.