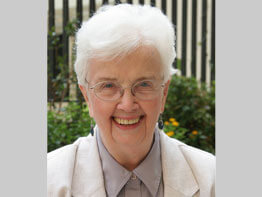 WASHINGTON – St. Joseph Sister Catherine Pinkerton of Cleveland is not usually one to seek the spotlight, but she will take center stage at the Democratic National Convention Aug. 27 when she gives the benediction to close the party’s third day of business.

Sister Catherine, 86, a lobbyist for Network, a national Catholic social justice lobby, will close the convention on the night that Sen. Barack Obama is expected to formally become the party’s nominee for president.

The invitation to lead the prayer came as a surprise to the veteran lobbyist, who has become a well-known figure on Capitol Hill during her 24 years with Network. She said she accepted only after informing her congregation’s leadership of the invitation.

“I didn’t know if I wanted to do that or not,” she told Catholic News Service Aug. 20. “I thought, ‘What have I got to lose?’ It’s my right to do that as an American citizen.”

While Sister Catherine is no stranger to the give-and-take world of politics, until recently her work has been limited to nonpartisan concerns related to international trade and investment. However, since April Sister Catherine has served as one of nine co-chairs of the Catholic National Advisory Council to the Obama campaign.

She said she agreed to serve on the council only after seeing the excitement the campaign has generated among young people, especially young Catholics, across the country.

“A lot of the young people with whom I’m working went double-barreled into it (the campaign),” she explained. “I thought if the young people are seeing something here and these are young kids immersed in Catholic theology and social teaching, then there’s something to this.”

After news of her role in the convention became public, calls poured in to Sister Catherine’s Washington office and her congregation’s motherhouse in Cleveland. The callers, for the most part angry Catholics, expressed concern that Sister Catherine’s appearance on the convention dais is tantamount to supporting the Democratic party’s platform, especially its unwavering support of the U.S. Supreme Court’s Roe v. Wade decision legalizing abortion.

A spokeswoman for the congregation said the motherhouse had received about 30 calls and a handful of e-mail messages through midday Aug. 20. Regina Sullivan, the order’s director of communications, said the congregation has told callers that Sister Catherine is taking the stage as an individual, not as a representative of the Congregation of St. Joseph.

Her work with the advisory council has been limited to offering advice on how to reach Catholic voters. She said the council has met intermittently over the last four months and that she has offered ideas when asked.

“The idea was they wanted to mobilize Catholic faith communities across the nation for Obama,” she said.