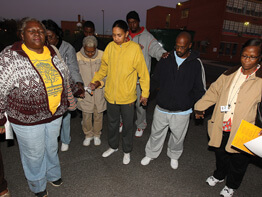 It’s a matter of no small urgency in Cherry Hill, where gangs start trying to recruit children as young as 6.

On the chilly autumn evening of Oct. 20, clergy, activists and longtime residents took to the streets surrounding St. Veronica, Cherry Hill, and made clear they’ve had enough of gangs, drug-dealing and violence. They marched through streets surrounding the church, singing and stopping at corners to bless them, hold hands, read Scripture and pray.

“The time for peace has come,” said Father Augustine E. Inwang, M.S.P., pastor. “We are tired of the violence.”

Singing “This Little Light of Mine,” about 60 people walked along streets beset by violence – four homicides have occurred within five blocks of St. Veronica this year – under the watchful eye of police officers on foot, in a cruiser and in a helicopter that circled overhead.

This year’s fourth and final Prayer Vigil for the Healing of Violence in Our Neighborhoods led by the archdiocese drew leaders and members of St. Veronica as well as some of the 11 other churches in Cherry Hill. Auxiliary Bishop Denis J. Madden, who attended the other three vigils, missed the fourth because he was in Rome, said Therese Wilson Favors, director of the Office of African American Catholic Ministries.

“I like the fact that we stopped at corners where we know there was violence, so we can tell the devil to move away because we know somebody greater than he is,” Ms. Favors said.

In interviews, Father Inwang and other participants worried about the influence of gangs – not least, their efforts to recruit first-graders.

“They’re starting really young; it’s very scary,” said Tiffany Stewart, the principal of Cherry Hill Elementary-Middle School, as she held Clinton, her 4-year-old. “We’re hoping that prayers, words of encouragement and wisdom, and then just adults ministering and mentoring to children will help them see that there are other paths.”

On the steps of St. Veronica, where the vigil began and ended, Father Inwang talked of too many lives ending too soon in the six years he has been pastor.

“The saddest part of my work here at St. Veronica has been burying young people, as young as 16, who are killed,” he said. “When they come for burials, this church is always full to overflowing. The young ones come from all over to mourn the death of their brothers.”

Cathy McClain, who coordinates youth ministry and outreach efforts at St. Veronica, welcomed the vigils to combat primarily drug-fueled violence in a city with one of the nation’s highest homicide rates.

Planning for the vigils, she said, brought together leaders from the archdiocese, city and state police and crime-fighting programs from Baltimore to as far away as Chicago.

“Traditionally, we know what’s going on in the communities, but the church hasn’t taken an active role in being proactive about preventing crime,” Mrs. McClain said. “The vigils are to talk about what’s going on outside the doors of the church and encourage the pastors to actively support parishioners getting involved in crime prevention.”

As a result of a grant proposal Mrs. McClain wrote, South Baltimore Family Health Centers in Cherry Hill will receive money from city and private sources for Operation Safe Streets, the community anti-violence program. The Cherry Hill effort will rely on prodigals who have renounced lives of crime to reach out and steer youngsters away from gun violence.