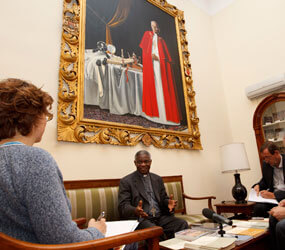 VATICAN CITY – Fighting in Ivory Coast and an airport shutdown prevented the pope’s personal envoy from entering the country for talks aimed at peace and reconciliation.

Cardinal Peter Turkson, president of the Pontifical Council for Justice and Peace, had been stuck in Accra, Ghana, since April 1 and returned to Rome April 8 after he was unable to get a flight into Ivory Coast.

“It was not possible to enter Ivory Coast because the airport was closed” and the only flights into the country were for United Nations’ staff, he told Vatican Radio April 9.

The cardinal said he asked the United Nations if he could travel on one of its planes leaving from Accra, but “the U.N. did not want to take this risk of bringing a person who was not a member of its staff into a very delicate and dangerous situation” that awaited in Ivory Coast.

He said he spoke by phone with the nuncio in Abidjan and with the president of the Ivorian bishops’ conference to talk about the unfolding situation there.

“I wanted to bring the pope’s message to the Ivorian bishops’ conference” in person, he said.

Pope Benedict XVI had sent the Ghanaian cardinal as his personal envoy to show his solidarity with the people affected by the conflict and to offer support for efforts for peace and reconciliation.

Army forces and militia supporting President-elect Alassane Ouattara had been clashing with security personnel and mercenaries loyal to outgoing President Laurent Gbagbo, who refused to leave office after Ouattara was declared the winner of elections in November.

French and U.N. forces on the ground in Abidjan arrested Gbagbo April 11 after an assault on his residence in Abidjan.

In an informal interview with journalists April 11 before reports emerged of Gbagbo’s arrest, Cardinal Turkson said he had wanted to go to Ivory Coast as a follow-up to a February gathering in the country that had gathered political, religious and community leaders in an effort to resolve the postelection impasse.

“While I couldn’t get my foot into Ivory Coast,” he said, the people, including top political leaders, “knew I was trying to get in” and that the pope and the Vatican were concerned about the escalating violence.

He said it was urgent for all sides in the fighting to come to the realization that the people had spoken with their votes last November and that leaders should respect the outcome.

Political differences, even among the country’s bishops, must be set aside, he said, and the safety, security and well-being of the citizens and the nation must come first.

According to the U.N. High Commissioner for Refugees, more than 150,000 people have fled Ivory Coast.

U.N. peacekeepers reported April 8 that they found more than 100 bodies buried in a mass grave in Duekoue, a town in which more than 800 civilians were suspected of being killed during clashes in late March, according to Caritas Internationalis and humanitarian organizations.