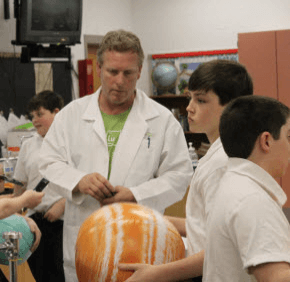 By Jessica Marsala
jmarsala@CatholicReview.org
CLARKSVILLE – Twenty-seven boys and girls dressed in navy slacks and plaid kilts, respectively, perched on the edge of their lab stools waiting for their class’s Internet debut, aware of their potential audience.
The sixth-graders at St. Louis School in Clarksville were the home class in Discovery Education’s monthly topical live stream March 19, this one focusing on the planets and the solar system.
St. Louis students assisted with experiments relating to the formation and contents of the solar system. The class was led by Duane Waber, a manager of instructional implementation at Discovery Education, a national online learning service based in Silver Spring.
Patti Duncan, who alternates with Waber in teaching the classes and recording them, said 212 users logged onto the live stream March 19, many of them with their classes. Others watched it on the Discovery live stream blog.
“If you wanted to guesstimate (the total audience), I would say 200 times 25,” Duncan said. “The archive on live stream will get thousands of hits.”
The pre-K through 8th grade institution is no stranger to the benefits of technology in the classroom. Not only does St. Louis School have a media center equipped with 35 laptops, it also has been subscribing to Discovery Education’s video and interactive resources for the past three years.
Colleen Craig, the director of development at St. Louis, said the STEM (science, technology, engineering and mathematics) school took the initiative in August to further “meet them (the students) where they already are” by purchasing a set of iPads for students to use in the classroom. The Clarksville school also purchased iPads for its faculty before the 2013-14 school year.
St. Louis middle-schoolers began using Discovery’s “instantaneous” digital textbooks, called “techbooks,” on iPads in science and social studies this year.
“It allows them (the students) to participate in an interactive way that isn’t always available for me to do,” said Janis Rose, who teaches sixth-grade earth science and seventh-grade biology at St. Louis. “I think it brings science a little bit more to home for them.”
Zulma Whiteford, St. Louis’ Discovery Education liaison who also teaches second- and third-grade Spanish and fourth- through sixth-grade computers, praised the “techbooks” because they “differentiate and cater to different types of learners.”
To fund its technology, the school primarily turned to its annual golf tournament and to grants from the Marion I. & Henry J. Knott Foundation and the Raskob Foundation for Catholic Activities.
Logistical challenges include getting 500-plus students access to 110 iPads, 20 of which were purchased as replacements for damaged or missing units. Richard Brotzman, St. Louis’ technology coordinator, keeps track of when and by whom the devices are checked out.
There is also the risk of the devices crashing, which is why science teacher Janis Rose often balances iPad usage with that of the laptops and traditional textbooks.
“There are always glitches but you have to kind of prepare for that,” Rose said, acknowledging how technology does not always make planning lessons or keeping students engaged easier. “You always have to have a backup.”
Also see:
CR Blog: What do you know about the eight meetings of popes and presidents on U.S. soil?
Pope’s box, with wood from Baltimore basilica, puts religious liberty in spotlight, rector says
PrevNext