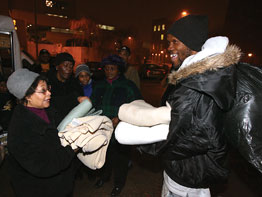 As Alizata Sorgho stepped off a bus filled with parishioners from two Baltimore City Catholic parishes Dec. 11 and into a park where many city homeless reside, she mustered the courage to interact with the urban destitute.

It was the first time the Pikesville resident had been that close to “Tent City,” and she was visibly shaken by the sight of the makeshift shelters constructed from clotheslines, tarps, coolers and discarded furniture.

With the support of the other parishioners who had disembarked from the bus, Ms. Sorgho began distributing blankets to the homeless men and women who eagerly lined up to accept their gifts of warmth.

“We had a blanket drive last year and we donated them to the city homeless shelter, but this year we had a massive blanket drive and we decided we wanted to give them directly to the people who need them the most,” said Antionette Taylor, a parishioner of Immaculate Conception and an organizer of the dual-parish initiative.

When coordinators put out the call a few months ago that they were collecting blankets, the response was overwhelming, Ms. Taylor said.

“We asked for used and new blankets and so many people decided they wanted to give,” she said of the Catholic community, many of whom live in households with less than modest means. “These people are less fortunate than us and we wanted to do what we could to at least help keep them warm this winter.”

Men, women and children were on hand to distribute blankets on the rainy December evening. They were joined by staff members of Loyola College in Maryland, Baltimore, who made the institution’s weekly visit to the park to hand out sandwiches, snacks, hot chocolate and water.

Michele Montoya joined the Loyola crew for the first time to feed the homeless.

The 35-year-old employee with the human resources department wasn’t concerned for her safety, but was wary about keeping her emotions in check as she handed food out to the hungry men and women who live on the streets of Baltimore.

“I tend to get emotional about these things, but I figured I could overcome that and give a little bit of my time for the people who really need the help,” said Ms. Montoya, a Severna Park resident and a parishioner of Our Lady of the Fields, Millersville. “I wanted to give something back to the community.”

As the last of the homeless collected their blankets in the park, the parishioners decided to direct their bus driver to the corner of Baltimore Street and Central Avenue to hand out the remaining blankets to the needy who hang out in that part of the city.

“We don’t want to take any of these blankets back with us,” Ms. Taylor said. “If we still have some left over, we’ll donate them to the shelter. We want everyone in Baltimore to be warm this winter.”

On Dec. 21 at 4:30 p.m., the National Homeless Persons’ Memorial Day service will be held at Baltimore’s Washington Monument as a way to remember homeless individuals who died in Baltimore in 2007.