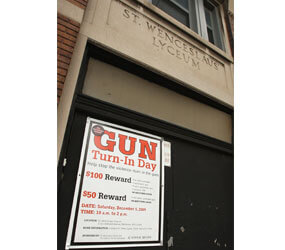 A woman drove up to St. Wenceslaus Church in a minivan Dec. 5 and told Father Peter Lyons, pastor, “I want to get these guns out of my house.”

Father Lyons, a member of the Third Order Regular of St. Francis, was more than glad to take the guns, and give her something in exchange, since his parish was a new site for a gun turn-in program sponsored by St. Gregory the Great, St. Wenceslaus and The Catholic Review newspaper. Those who turn in guns can earn a reward of $50 or $100 for each working gun surrendered.

Among the 17 guns turned in at St. Wenceslaus, in East Baltimore, were six rifles and 11 handguns. Four of the guns were semi-automatic guns, which earned the higher $100 reward. Over at St. Gregory in West Baltimore, five guns were surrendered on Saturday, and four more brought in the following week.

Weather may have affected the turnout, since the season’s first snowfall hit the city that day, making travel difficult. “It was snowing very hard,” said Monsignor Damien Nalepa, pastor of St. Gregory.

Both pastors considered the effort a success. Father Lyons said violence continues to be a problem in the city, noting that there was another shooting in his community that weekend, but acknowledging “It will be hard to measure the impact (of the gun buyback) on street crime.”

Most of the guns turned in came out of attics or closets. Four or five of them were loaded. He said one woman said her grandchildren visit her home often and get into everything, and doesn’t want a tragedy to occur if they get their hands on a gun.

The turn-in process is anonymous, with no questions asked. Parish staff members and volunteers log the type of gun, and verify that it is unloaded and safe. At the close of the event, the guns are turned over to local law enforcement.

With the guns brought in during this drive, the total collected since St. Gregory Parish began the campaign a few years ago is now more than 185.

The parishes and The Catholic Review hope to schedule three or four gun turn-in days during 2010. Support and contributions from members of the community will be needed to sustain the drive through the year, according to Catholic Review associate publisher Christopher Gunty.

Information is also available at www.CatholicReview.org/guns, and donations may be made online at that site.