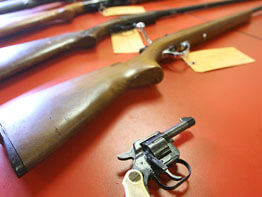 What started out as a one-time mission to rid Baltimore’s streets of firepower has become an enduring crusade for city parish St. Gregory the Great.

Armed with grant money from a Baltimore attorney, the church has shelled out cash to citizens who’ve turned in guns, totaling more than 50 weapons in the past nine months. Officials hope to collect more when the parish holds its sixth gun buy-back 11 a.m. to 3 p.m. March 8.

The goal is to be proactive in battling the city’s homicide rate, which hit an eight-year high of 282 in 2007.

“We should believe as Christians we have a responsibility to rid violence from our community and our world,” said Monsignor Damien Nalepa, pastor of St. Gregory the Great. “It’s not enough to just wish it away or talk about it. We’re each called to do something to put an end to violence.”

The parish held gun collections in the late 1990s that netted 75 firearms, but abandoned the operation after the city’s murder rate declined. When it rose again in 2007, giving Baltimore one of the nation’s highest murder rates, city faith communities mobilized.

After the first cash-for-guns turn-in at St. Gregory the Great last May, the parish decided to hold additional buy-backs to keep more weapons off the streets and to promote community vigilance, Monsignor Nalepa said.

The church offers citizens $100 for each automatic or semiautomatic firearm turned in and $50 for all other working guns, with no questions asked.

All of the guns collected so far have been turned over to the Baltimore City Police Department, which destroys the weapons, he said.

Archbishop Edwin F. O’Brien’s concern for the city’s murder rate has prompted him to assemble city pastors March 6 at St. Gregory the Great to develop a course of action in combating the murder rate.

The summit will allow clergy in the urban vicariate to examine programs like the gun buy-back and propose other initiatives for the future, said Karen Mesaris, a staff member in the office of Bishop Denis J. Madden, urban vicar.

Critics of buy-back programs assert that such efforts generally result in the return of old, non-functional weapons and have the potential of providing cash to those who want to arm themselves with newer and more powerful artillery.

However, Baltimore City Council President Stephanie Rawlings-Blake applauded the St. Gregory the Great movement. She believes gun buy-back initiatives can mobilize a community around a common goal – to rid the city of illegal firepower and violence.

“In the rare instance that a firearm is returned to a buy-back program that could have otherwise ended up in the wrong hands, then that effort is very much worth any criticism such programs draw,” said Shaun E. Adamec, a spokesman for Ms. Rawlings-Blake.

The parish wants to make the point that guns have played a significant role in Baltimore’s rise in violent crime and to instill a philosophy that firearms are dangerous to citizens, the community and the world, Monsignor Nalepa said.

“For so many people, especially young people, guns are like toys,” he said. “Because of that, there is a loss of the respect for life. Guns are used so senselessly in attacking each other.”

Realizing hardened criminals are not the individuals turning in the guns, Monsignor Nalepa said the buy-back crusade is a tool in arming law-abiding citizens with a new attitude about weapons and urban violence.

“It’s out of this theology that we try to raise the consciousness of our parishioners to stop the violence and work for peace,” he said. “This would apply to the world, the home, the community and the church.”