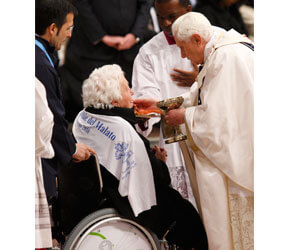 VATICAN CITY – The pastoral care of the sick and infirm is a priceless gift the church offers to those who suffer, to their families and to the world, Pope Benedict XVI said.

Accepting and offering up one’s suffering along with sincerely and selflessly participating in the suffering of others are all “miracles of love” –- signs of God’s love operating within the church, “performing great things through humble and simple people,” the pope said Feb. 11 as he marked World Day of the Sick on the feast of Our Lady of Lourdes.

Meeting and blessing sick people and their caregivers during a Mass in St. Peter’s Basilica, the pope said another miracle at work was the presence of God’s grace in the many people who care for those who suffer, offering them the courage to face pain and illness “with just the strength of faith and of hope in the Lord.”

“We live a joy that does not forget suffering, but understands it,” he said in his homily. “In this way the ill and those who suffer are, within the church, not just the recipients of care and concern, but first and foremost protagonists in the pilgrimage of faith and hope” embarked upon by all Christians, he added.

Before the Mass, a few hundred people – including many using wheelchairs – processed down the broad boulevard leading to St. Peter’s Basilica. Led by flag twirlers in medieval costume, the procession followed a truck carrying the relics of St. Bernadette Soubirous –the 19th-century saint who witnessed a number of apparitions of Mary at a grotto outside Lourdes, France.

The relics were carried by ushers up the main aisle of St. Peter’s Basilica and placed in front of the altar. The Mass was broadcast live to pilgrims gathered at several Marian shrines around the world, including Lourdes, Fatima in Portugal, and Czestochowa in Poland.

The Mass also marked the 25th anniversary of the institution of the Pontifical Council for Health Care Ministry. Pope Benedict said the council was created to help promote “a world better capable of welcoming and healing the sick as people” whose dignity must be respected.

Through the council’s work, the church wants to help sick people “live the experience of illness in a more human way, not denying (their infirmity), but giving it meaning,” he said.

In his homily, the pope also stressed the important role priests play in carrying out the church’s mission of healing and evangelization.

Priests and those who are ill must work together, forming a kind of alliance, he said, in which the sick call out for God and the priests quickly respond with God’s loving and saving grace.

“Here we can see the importance of the pastoral care of sick people, which is of an inestimable value, and the immense benefit that it offers first of all to the ill and to the priest, but also to family members, loved ones, the community and, through unknown and mysterious ways, the whole church and the world,” said the pope.

In his written message for World Sick Day, the pope highlighted the church’s role in bringing Christ’s love and healing to all those who suffer, whether from poverty, oppression, remorse or illness. He wrote that the church must increase its presence among the sick and in society so it can better help defend human life from conception to its natural end.