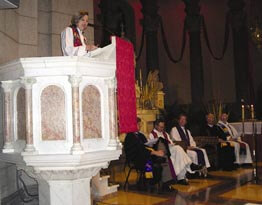 Lutheran minister Rev. Karen Brau’s animated reflection on how to bring peace in the war zones in Iraq and the streets of Baltimore had more than 50 Catholics, Presbyterians, Lutherans, Episcopalians and Baptists listening intently during a March 28 Lenten service at Ss. Philip and James in Baltimore.

The Vigil for Peace at Ss. Philip and James marked the final Wednesday night gathering in the five-part Lenten series featuring the reflections of Rev. Brau, pastor of Amazing Grace Evangelical Lutheran Church in East Baltimore.

“This gives us wonderful opportunities to come together as people of faith,” said Father William A. Au, pastor of Ss. Philip & James, “as a way of getting to know each other and understanding each other.”

In discussing how to bring peace, the Lutheran pastor said people of all faiths will have to set the example by learning how to co-exist in a respectful and nonviolent manner.

“Lord knows we are all in this together,” she said. “Existing together is what peace is all about. It matters when one of us hurts.”

Rev. Brau’s message served as a metaphor for the purpose of the ecumenical movement of the parishes during the Lenten season.

“Peace has to start somewhere,” said Beverly Withers of Towson, a member of University Baptist Church near the Homewood campus of The Johns Hopkins University.
“If the churches can get together, maybe we can spread peace from there.”

The union of has fostered partnerships that reach beyond Scripture, said Sarah Stevens-Rayburn, an Episcopal member of Cathedral of the Incarnation.

It has bolstered their involvement in projects like Habitat for Humanity and offered people from all five churches opportunities to forge friendships with like-minded people, said the Tuscany-Canterbury resident.

The five parishes also hold an annual joint Thanksgiving Day service, giving them another opportunity to worship, socialize with one another and plot multi-party community-service projects.

“Underneath it all, we are all Christians,” said Christina Saenz de Tejada of Homeland, a parishioner of Ss. Philip & James. “This series and the Thanksgiving service give us an opportunity to unite and celebrate our differences and similarities.”