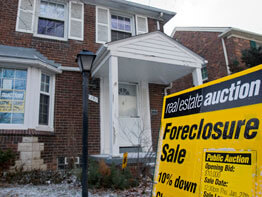 WASHINGTON – Phones are ringing off the hook in at least one Catholic charity.

“We get anywhere from 100 to 150 calls a day from people on the verge of losing their homes or renters who are being displaced,” said Karen Wallensak, director of Catholic Charities Housing Resource Center in St. Louis.

The St. Louis center employs 10 housing counselors who each carry a caseload of 40-60 families. Ms. Wallensak said they’re helping, on average, 500 families at any one time.

Realtytrac.com, a foreclosure tracking firm, reported one in every 483 U.S. households was in some stage of foreclosure. Charities and churches nationwide are seeing an increase in requests for assistance. According to a Catholic Charities USA survey released June 11, 78 percent of Catholic Charities agencies nationwide reported an increase in requests for assistance with rent or mortgage payments.

“Our clientele is changing. We’re used to seeing people who are low income, people we’ve helped before. Now average working people have come down to ask for help. Families are stretched as far as they can be stretched,” said Sharon Mann, community relations director of Catholic Charities of Southern Nevada, based in Las Vegas.

Nevada has the country’s highest foreclosure rate and the local agency, which offers rent assistance as well as emergency food and shelter, is feeling the pinch. “Some of our donors have been coming in. We don’t know what’s going to happen to us by the end of the year,” Ms. Mann continued.

Economists blame the current mortgage crisis largely on defaulted subprime loans. The loans, often given to people who otherwise wouldn’t qualify for a home loan, are typically offered at higher than average interest rates that are adjustable and often increase over time. As the adjustable rates increase, mortgage payments can double and even triple, leaving borrowers unable to pay their mortgages.

The problem has become so prevalent that churches such as St. Mary Star of the Sea in Far Rockaway, N.Y., even advertise mortgage and financial counseling referrals in their church bulletin. “When the information first came out we’d get a small, steady stream of people wanting it. Now just about every week I talk to two or three families,” said Father James Cunningham, pastor of St. Mary Star of the Sea and St. Gertrude the Great, also in Far Rockaway.

St. Mary Star of the Sea is in immigrant-rich southeast Queens, an area so ravaged by foreclosures that its councilman described it as “ground zero” of the subprime mortgage crisis.