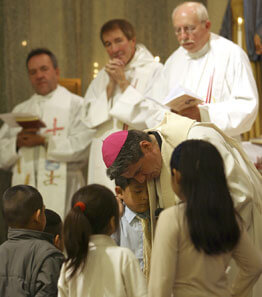 CHICAGO – On Oct. 30, at Immaculate Heart of Mary Church in a Chicago neighborhood known as “Back of the Yards,” Auxiliary Bishop Gustavo Garcia-Siller of Chicago celebrated a Mass for victims of violence. He read dozens of victims’ names and met with their family members and loved ones.

But the next day, another victim was added to the roll: Leticia Barrera, shot in gang crossfire as she returned home from trick-or-treating with her three children on Halloween. She was four months pregnant, and it was her 32nd birthday.

Providing support and comfort through the rituals of funerals and wakes is one of the ways in which the church is obligated to respond to violence, according to Bishop Garcia-Siller and several priests who serve in communities where such violence has happened all too often.

“Violence is an unhealthy thing,” the bishop said. “It is destructive. We are called to life; life is our goal. We are made by God who is the God of life. Some people think death is the end, but it’s not. After death, there is resurrection and new life.”

But the obligation of the church goes much further, said the bishop and others interviewed by the Catholic New World, Chicago’s archdiocesan newspaper. The church must walk with the victims through their mourning and grief and healing, and it must also work with the wrongdoers, to heal them and help them find the right path.

Precious Blood Father David Kelly lives and works in a house in the Back of the Yards neighborhood, offering a ministry of reconciliation.

Helping people find new life in the wake of violence is “directly tied to the central beliefs of Christians,” Father Kelly said. “It’s the power of the passion, death and resurrection of Christ. There’s hope in the midst of this.”
In practice, that means reaching out to victims of violence and their family members, listening to them and helping them join into “peacemaking circles” where they can share their feelings, and, they hope, move beyond the grief to a new place.

Those whose grief is raw – the mother who has not left her home for a year after losing her only son, or the parents who had two sons gunned down within three months – can take hope from others who have found new ways to live, the priest said.

“They can say, ‘I know how you feel,’ and there’s comfort in that,” Father Kelly said. “They can see that maybe I won’t always be like this.”

Father Michael Pfleger, pastor of Chicago’s St. Sabina Parish, knows the feeling of helplessness that can strike family members. In 1998, his 17-year-old foster son was shot. He died in Father Pfleger’s arms.

“I have buried my mother and my sister,” Father Pfleger said. “The most difficult thing I have had to do was bury Jarvis. That was the one time I felt paralyzed, like I couldn’t make it. It was only my faith that pulled me out of it.”

Those who work in the Precious Blood order’s reconciliation ministry also serve in the Cook County Juvenile Detention Center through Kolbe House, the Archdiocese of Chicago’s prison and jail ministry. The young people in the center have their own peacemaking circles. When they return home, the ministry of reconciliation is there for continued support and mentoring.

When possible, Father Kelly said, the families of the victims and those who have harmed them can come together.

“The victims often want to know, ‘Why? Why did my son have to die?’” Father Kelly said. “And the accused, many times they want to say ‘I’m sorry.’ There’s a lot of remorse happening, but the legal system doesn’t allow for it until after the trial is over.”

Father Matthew Foley, pastor of Chicago’s St. Agnes of Bohemia Parish, said many, if not most, of the shootings are done by young people hoping to prove themselves to older gang members and who have no idea of the ramifications of what they’ve done. Many of those young people have been exposed to violence in their own homes.

“Domestic violence is the No. 1 call to the police in our neighborhood,” he said. “I always wonder what a child sees. I think it makes them almost numb.”

St. Agnes of Bohemia tries to honor the mourning process by having nine days of prayers with families, and then making a procession with the Blessed Sacrament to the site where the violence took place. This year, the parish has had six or seven of those processions, Father Foley said.

“Our mission is what we do because we go to church. Our worship is as real as it is lived out,” Father Pfleger said. “If you read the Gospel, Jesus’ whole ministry is reaching out to people in situations of crisis. That is our mission – we are the salt and the light.”