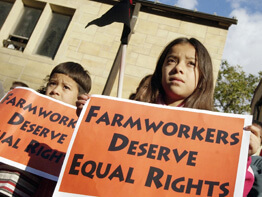 WASHINGTON – The current tone in the immigration reform debate has “inflamed fears and misunderstanding among some portions of the American public, leading to a polarized and vitriolic atmosphere,” said a U.S. church official.

Bishop Gerald R. Barnes of San Bernardino, Calif., chairman of the U.S. bishops’ Committee on Migration, noted that while “voices of division and fear are loud” the “truth about immigration and migrants in this country ultimately will prevail.”

The bishop, in a Sept. 27 statement issued in Washington, said migrant workers, including the undocumented, make important contributions to the nation’s economy through their work in agriculture, construction and service industries. He faulted the United Stated for refusing “to acknowledge these contributions” and relegating migrants to “a permanent underclass of workers, without full rights.”

The failure of the U.S. Senate to pass comprehensive immigration reform legislation this summer has set back, but not ended, attempts to repair the immigration system, according to the bishop. He said inaction on reform is subjecting immigrants nationwide to enforcement raids and other measures that he said “separate families and lead to exploitation and abuse.”

He also said the failure of the federal government to pass immigration reform legislation has caused local and state governments to “fill the federal void,” which in turn has created “a patchwork of immigration policies across the nation.”

Bishop Barnes pointed out that local jurisdictions have been pitted against each other since some cities and counties have passed their own measures denying services to those in the country illegally. State and local laws seeking to force undocumented migrants to leave the country by denying them the means to subsist “not only violate human dignity, but undermine the common good,” he said.

The U.S. bishops reaffirm their view, he said, that enforcement-only measures at any level will “further drive undocumented migrant workers into a hidden underclass and create more fear and suspicion in immigrant communities.”

“Such measures will not repair a system that is inadequate to meet the labor needs of our economy,” he added.

Bishop Barnes acknowledged the right of the United States to secure its borders and enforce immigration laws as long as enforcement respects human rights and dignity and minimizes the separation of families.

He also reiterated what the U.S. bishops have consistently stated: Comprehensive immigration reform, “which reforms all aspects of our immigration system, is the best way to secure our country and humanely and effectively address the problem of unauthorized migration to our country.”

The bishop called on Congress to “immediately return” to the work of immigration reform and called on Catholics and all Americans to “work together constructively” for a positive outcome on the issue.