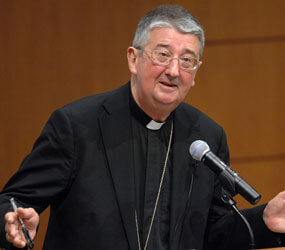 MILWAUKEE – Much more remains to be done to “turn around the culture of an institution” that allowed thousands of children to be abused by priests in the Archdiocese of Dublin, the head of the archdiocese told an international conference on the clergy sex abuse scandal April 4.

Opening the two-day conference at Marquette University Law School in Milwaukee, Archbishop Diarmuid Martin was harsh in his assessment of most of the priest abusers he had met since becoming archbishop of Dublin in 2004.

“I can honestly say that with perhaps two exceptions, I have not encountered a real and unconditional admission of guilt and responsibility on the part of priest offenders in my diocese,” he said. “Survivors have repeatedly told me that one of the greatest insults and hurts they have experienced is to see the lack of real remorse on the part of offenders even when they plead guilty in court.”

Archbishop Martin said a Feb. 20 “liturgy of lament and repentance” at the Dublin cathedral “was a truly restorative moment” for many abuse survivors, who “felt that they had encountered in it a church which was beginning to identify with their hurt and their journey.”

“But there are so many survivors who have not yet had that experience of being surrounded by a church in lament, rather than a church still wanting to be in charge,” he added.

The Dublin leader said the church must analyze whether “the culture of clericalism” might have “somehow facilitated disastrous abusive behavior to continue for so long” and must repent for the “false understanding of mercy and human nature” that allow offenders to continue to abuse children.

“Serial sexual abusers manipulatively weaved their way in and out of the net of mercy for years, when what they really needed was that they be firmly blocked in their path,” he said.

Archbishop Martin also urged greater attention to seminary formation and warned against accepting candidates for priesthood who “may be looking not to serve but for some form of personal security or status which priesthood may seem to offer them.”

He said he planned to require all future priests to “carry out some part of their formation together with laypeople so that they can establish mature relationships with men and women and do not develop any sense of their priesthood giving them a special social position.”

“There are signs of renewed clericalism which may even at times be ably veiled behind appeals for deeper spirituality or for more orthodox theological positions,” he said.