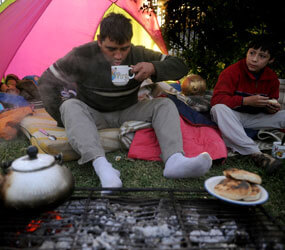 LIMA, Peru – As Chile’s Catholic Church coordinated aid to victims of the massive earthquake that struck the country’s central coast on Feb. 27, church leaders expressed their condolences to families of the more than 700 people killed.

“This has been a catastrophe,” said Bishop Alejandro Goic Karmelic of Rancagua, president of the Chilean bishops’ conference. “We ache for our brothers and sisters who have lost their lives, and we pray for their families and friends and those who have lost all the possessions for which they have worked all their lives.”

After praying the Angelus Feb. 28, Pope Benedict XVI said, “I am praying for the victims and am spiritually close to those affected by this serious catastrophe. For them, I ask God to grant relief of suffering and courage in this adversity.”

Chilean President Michelle Bachelet declared the southern regions of Maule and Bio-Bio a disaster area, ordered the army to reinforce the police and imposed a nighttime curfew on the region to halt looting of stores. She also asked other countries to assist with field hospitals, water purification and communications equipment, and generators.

Telephone communication with Chile still was difficult March 1, and Chileans abroad struggled to contact relatives. Much of the disaster area and even some communities around the capital, Santiago, were without electricity.

Most deaths were in the Maule region, about 200 miles south of Santiago, where a quake-triggered tidal wave swept through coastal villages.

Cecilia Espinoza, a Maryknoll lay missioner, had just returned to Santiago with a group of students from Notre Dame and Marquette universities before the earthquake struck. While the group was unharmed, Espinoza was trying to learn if the people they had visited in the Maule region, where she and her family worked for many years, were safe.

In the coastal fishing village of Constitucion, “we saw a beautiful parade of folk groups in the plaza, which is a couple of miles from the beach and blocks from the river,” Espinoza wrote in an e-mailed update. “Now there are boats in the middle of the plaza, and the coastline and beach have disappeared.”

The magnitude 8.8 quake, one of the eight strongest on record, struck at 3:34 a.m. local time Feb. 27. Over the next two days, more than 115 aftershocks measuring more than 5.0 were recorded, nine of them registering more than 6.0. The strongest earthquake on record, which measured 9.5, struck the same area in 1960.

Although earthquake-prone Chile has upgraded its infrastructure over the years to withstand tremors, bridges collapsed and highways crumpled during the most recent temblor. In the hardest-hit area, around Linares, Chillan and Concepcion, Chile’s second-largest city, people slept in the streets after the disaster.

In Santiago, the airport reopened to limited flights Feb. 28 and parts of the subway also were back in service. Government officials announced that the school year, scheduled to start March 1, would begin a week later.

President-elect Sebastian Pinera, who was scheduled to take office March 11, toured the disaster area and pledged that the country would rebuild with “budget reallocations and the solidarity of the private sector.”