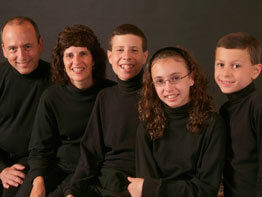 “Littleway Christmas I” features his 13-year-old daughter, Lucy, on seven of its 11 original songs and includes solos by sons TJ, 15, and Daniel, 9, with backup vocals by his wife, Rene.

“I wanted to write songs that really focus on the Christmas season,” said Franzak. “The more society gets comfortable with calling it the ‘holiday season’ or ‘sparkle season,’ it saddens me. That distances the holiday from its origin. I wanted the album to be Christ-centered.”

From “That’s What Christmas Means” and “Let It Be Done” to “Emmanuel” and “On Christmas Day,” Franzak takes listeners on a musical journey that is both spiritually rich and fun. The first song on the compact disc opens with sleigh bells and synthesizers and features seasoned session musicians from Minnesota and Los Angeles.

The CD is packaged as a “musical Christmas card,” complete with original artwork and family photos.

“The album reflects the way we live and what we believe,” said Franzak. “The lyrics reveal the personal experience of family and friends at Christmas. They also show how we integrate our experience as Catholics, as we prepare and ponder the mystery of the Incarnation.

“We’d been talking as a family about doing something musical together,” Franzak added. “We wanted to find a way to make music, and also make a difference in the lives of others. One of our main goals is to make a difference by supporting causes that are important to us.”

A portion of sales from the CD and live appearances will be given to Autism Speaks and the Advisory Board on Autism and Related Disorders. Franzak plans two more Christmas albums in the next few years, with a portion of sales being donated to other local and national organizations.

“This is the beginning of something that we will continue to work on as a family,” he said. “We want to grow this idea. For me, it’s no longer about being a solo recording artist. It’s about using our musical abilities, sharing values and working together.”