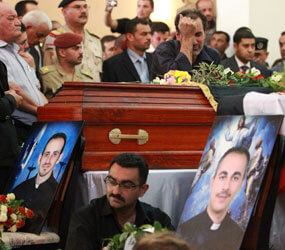 WASHINGTON – Condemnation of the Oct. 31 attack on Baghdad’s Syrian Catholic cathedral that left 58 people dead and 75 injured has widened to include a cross-section of Christian and Islamic communities.

The religious leaders unanimously rejected violence as a means for change and urged political leaders and governments to take steps to protect members of the Christian minority who reside not just in Iraq but throughout the Middle East.

Churches for Middle East Peace, representing 23 national Christian denominations and organizations, called upon U.S. Secretary of State Hillary Clinton to ensure that U.S. policies “seek in every way possible to reinforce the strong history of peaceful religious coexistence in Iraq.”

Warren Clark, the organization’s executive director, and Martin Shupack, who chairs the group’s board of trustees, told Clinton in the letter that the United States “has a moral responsibility to help Iraq rebuild in a way that upholds the lives, dignity and security of all its citizens.”

A Nov. 4 statement from Catholic and Orthodox leaders in Jerusalem decried the violence, saying “there is no possible explanation which we find acceptable for the killing of innocent people under any circumstances.”

The 13 leaders offered prayers for the dead and injured as well as for the restoration of peace and security for the people of Iraq and the entire Middle East.

“We embrace all efforts for building bridges of understanding for mutual respect among all faiths,” the statement said.

In another statement released Nov. 4, the Islamic Society of North America said it was “outraged by the recent barbaric attack.”

“ISNA believes in the rights of all people to worship freely without fear of intimidation or violence,” Imam Mohamed Magid, society president, said. “The level of violence in this incident only heightens our responsibility to speak out against religious intolerance and hatred.”

Guirgis Ibrahim Saleh, general secretary of the Middle East Council of Churches, also denounced the attack, saying the council will continue working to strengthen the values of “national unity and tolerance in the region.”

Armed militants wearing explosives stormed the cathedral while an estimated 100 faithful were celebrating evening Mass, according to news reports. The siege ended hours later when Iraqi police forced their way into the cathedral, but not before some of the militants detonated the explosives, killing dozens in the church and causing widespread damage to the cathedral.

The Islamic State of Iraq, with suspected ties to al-Qaida, claimed responsibility for the attack.