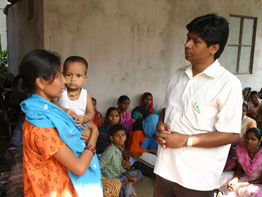 CUTTACK, India – Suresh Nayak, a Catholic from Orissa state’s Kandhamal district, cannot overcome the experience of being forced, under the threat of death, to convert to Hinduism.

“We lost everything, but the humiliating ceremony to disown our Christian faith still haunts me,” Mr. Nayak told Catholic News Service at a refugee camp in Cuttack, about 20 miles from Bhubaneswar, Orissa’s capital.

“They tonsured my head and made me drink cow dung water to purify me. We were also forced to write a declaration that we are becoming Hindus of our own (will) and giving up the Christian faith,” he said.

Mr. Nayak said he and his family, as well as 20 more Christian families from Pirigurg village in Kandhamal district, fled to nearby jungles Aug. 24 after they were alerted that Hindu extremists were planning to target their village.

“They looted our houses and burned everything down,” he said.

Mr. Nayak and several others returned to his village after local Hindu leaders, assuring them of their safety, invited them back for a peace meeting. But Hindu extremists had a different agenda and forced 13 Christian couples to attend the conversion ceremony.

While the men had their heads ceremonially tonsured as a mark of embracing Hinduism, the women were forced to eat sacred offerings to mark their conversion.

Mr. Nayak’s ordeal is no exception.

Father Mrutyunjay Digal, secretary to the archbishop of Cuttack-Bhubaneswar, told CNS that thousands of Christians have been subjected to conversion ceremonies.

“I was shocked to see my own elder brother being made to shout Hindu chants on TV (news channels),” said Father Digal. The parents of another priest also were forced to “convert.”

“If they (Christians) refused, they are just beaten up. We are getting reports that some of them have been even killed,” said another priest who asked to remain anonymous.

Church activists have confirmed that 28 Christians, most of them Catholics, have been killed by Hindu mobs in Kandhamal after a prominent Hindu leader was murdered Aug. 23. Maoists have claimed responsibility for the killings, but Hindu radical groups continue to blame Christians.

One of those killed was a young man who was beaten and buried alive for refusing to disown his Catholicism. When he asked why they were burying him alive, the mob said, “Jesus will save you,” the youth’s brother-in-law told church workers.

“Our people are being hunted out now,” said Father Prasanna Singh, vicar of St. Peter Church in Pobingia. Thirty-four of the 37 Catholic families in Pobingia, he said, already have undergone the forced conversion ceremony.

In many places, Christians are asked to burn Bibles and join in torching churches or Christians’ houses to prove they have forsaken Christianity, he said.

“Many of my parishioners in other stations (more than 150 families in 12 stations) are telling me these dreadful stories,” said the priest.

Father Singh had been on the run since Aug. 23, when he heard banging on his gates.

“I thought they had come again,” said the priest who had to run for his life after his church was destroyed last Christmas by Hindu mobs.

“But this time, it was policemen asking me to run for my life,” said the priest, who instantly fled to the jungles.

Over the next seven days, Father Singh hid in a mountain, coming down stealthily to get food and water during the day.

“Their plan now is to annihilate Christianity and their main targets are the priests,” said Father Singh, who said he has been getting calls for from strangers on his mobile phone asking for his location.

As a result, two dozen priests in Kandhamal parishes are on the run, he said.