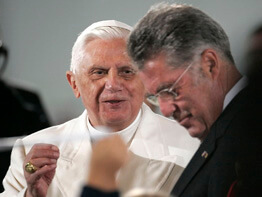 VIENNA, Austria – Pope Benedict XVI arrived in Austria for a three-day pilgrimage, saying Christianity was not just the legacy of Europe’s past but “the way to the future.”
The pope stepped off his chartered Alitalia jet Sept. 7 in heavy rain at the Vienna airport, where he was welcomed by Austrian President Heinz Fischer, who quickly ushered the pontiff into a hangar.
After an honor-guard salute, the pope said in a speech that he felt at home in Austria, a country “deeply imbued with the message of Jesus Christ.” His voice was still somewhat rough after a recent bout of hoarseness.
The pope said the focus of his journey, a visit to the Marian shrine at Mariazell, would take him to the “maternal heart of Austria” and underline the role of Mary throughout Central Europe.
The Marian sanctuary, the pope said, “reminds us of an essential dimension of human beings: their capacity for openness to God and his word of truth.”
“Mariazell does not only represent 850 years of history, but shows us on the basis of that history – as reflected in the statue of the Blessed Mother pointing to Christ her son – the way to the future,” he said.
The pope said he also wanted to encourage renewed interest in pilgrimages, especially among young people seeking space for reflection and meditation. The important thing, he said, was to make a connection between these spiritual excursions and daily life.
“Pilgrimage means more than just journeying to a shrine. The journey back to our everyday life is also fundamental,” he said.
A group of uniformed Viennese schoolchildren stood next to the papal podium, waving shyly to the pope when he arrived and bursting into a welcoming song when he finished his talk. The pontiff rose and went over to greet them, making their day.
After the airport formalities, the pope traveled to the center of Vienna for two important ceremonies: a prayer before a Marian pillar and a silent tribute to Holocaust victims.
In the historic Am Hof Square, hundreds of young people in plastic yellow rain slickers cheered when the pope arrived in his glass-walled popemobile. A pop group with trumpets, guitars and drums belted out a lively rendition of “Jesus Christ, You Are My Life,” the song known to many Catholic young people through World Youth Day celebrations.
The pope, who stood on a large covered balcony next to the square, beamed in appreciation. Then he faced a bronze statue of Mary that stands atop a tall column in the center of the square and prayed for “pilgrim intentions” that summed up several themes of his visit:
– Devotion to Mary as part of Austria’s Christian history.
– Overcoming tensions in the country’s increasingly multicultural population.
– Commitment to protection of human life “from the moment of conception.”
– A call for priestly and religious vocations.
– Protection of Sunday as a day of rest and worship.
– Appreciation of the church’s charity network.
In a brief talk, the pope said Christians have turned to Mary from earliest times as a figure whose maternal love extends to all humanity. Above all, Marian devotion can help lead people to the truth of salvation in Christ, he said.
“If we continue to bring our everyday concerns to the Immaculate Mother of Christ, she will help us to open our little hopes ever more fully toward that great and true hope which gives meaning to our lives,” he said.
The pope’s talk was interrupted by technical problems with the public address system set up in the rain-drenched square. The pope stopped partway through his talk, smiled broadly and listened as the young people began chanting, “Benedikt! Benedikt!”
Then the pope entered the Am Hof Church and knelt before the Blessed Sacrament. The pews were crammed with about 1,000 faithful, most of them ethnic Croats; the church has been used by the Croatian Catholic community in Vienna since the 1960s.
Standing before the altar, the pope began a prayer to Mary that Austrian young people were to continue to recite throughout his three-day visit.
Afterward, the pope rode around the corner to the “Judenplatz” or Jews Square, where he stood next to Vienna Chief Rabbi Paul Chaim Eisenberg and prayed silently in front of a memorial to the murdered Jews of Europe, including the estimated 65,000 Austrian Jews killed by Nazi extermination efforts during World War II.
The memorial, in the form of a concrete cube, was built in 2000 on the site of a Jewish synagogue that was destroyed during a pogrom in 1421. At that time, some 200 Jews were burned alive on a pyre on the outskirts of the city.
On the plane taking him to Vienna, the pope told reporters he was stopping before the monument to demonstrate “our sadness, our repentance and also our friendship with our Jewish brothers.”
A plaque overlooking the monument, placed by Austrian Catholic leaders, acknowledges that Christian preachers of the early 15th century spread superstitious anti-Jewish ideas, and that Vienna Christians generally accepted the destruction of the synagogue without resistance.
During World War II, the plaque says, some Christians fought in vain against the Nazi racial policies, but “they were too few.”
“Today, Christianity regrets its share in responsibility for the persecution of Jews, and realizes its failure,” the inscription states.
Most of Austria’s approximately 200,000 Jews left the country after it was annexed by Nazi Germany in 1938; about 10,000 Jews live in Austria today.
When he arrived at the monument, the pope greeted the president of the Viennese Jewish community, Ariel Muzicant, and then, under a cluster of umbrellas, took time to shake hands with several older members of the community.
Crowds welcoming the pope into Vienna were thin in the inclement weather, and the papal program in Austria included no big-venue events. The biggest crowd of the visit was expected at the papal Mass Sept. 8 at the Marian shrine of Mariazell, which can accommodate only 50,000 pilgrims at one time.